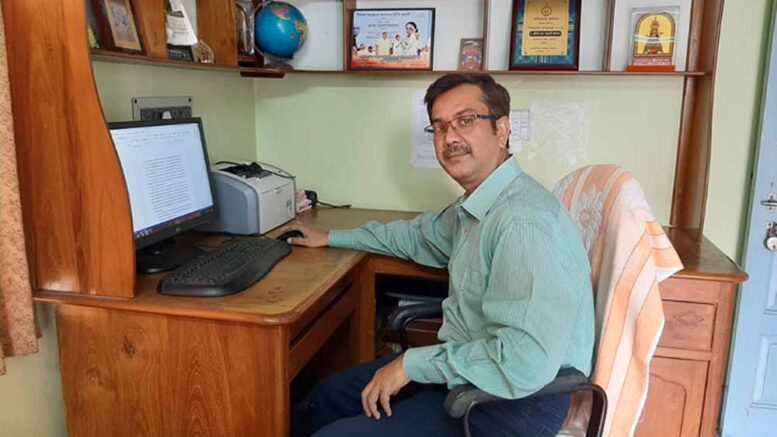 Kalyani, Nov. 22: Kalidas Das, of Kalyani is one of the two teachers of government run colleges in Bengal who has ranked among the top 2% of researchers in the world from India identified by the USA’s Stanford University.

Attached to the Mathematics department of Krishnagar Government College, Kalidas is one of the globally acclaimed researchers who have been working on the utility of Nanofluid, primarily used to increase the thermal ingredients as coolant in heat transfer machinery.

The list of the top scientists prepared by Stanford University after assessing the research works published up to 2019.

The exhaustive list prepared by the University has 1,59,683 persons with nearly 1492 scientists, doctors and engineers in India of which around 70 from Bengal which include 33 from Jadavpur University followed by 32 from ISI, 7 from Bose Institute and others. Only 3 teachers including Das of state run colleges only figured in the list.

Das has to his credit 94 papers which were scanned by the Stanford University authority. His name has been figured in the list of top researchers in the field of mechanical engineering.

Speaking to The NfN, Das said, “The recognition is beyond my imagination. I am grateful to people around me who always encouraged me to work in such an unusual subject which has been largely linked to day to day life and also mechanical development that also involves human health”.

Son of a farmer Brought up in Eruli village in Nadia’s Dhantala, Das did his schooling in Sarishadanga Dr. Shyamaproshad High School. He later did her undergraduate and postgraduate degree in Mathematics at Kalyani University followed by PhD in fluid dynamics. After working as a teacher at a school in Chakdah, Das joined the West Bengal Education Service being a teacher with Kalyani Government Engineering College and eventually settled in Kalyani town. In 2018 he joined Krishnagar Government College being transferred from Coochbeahar.

When asked what fascinated to work on nano fluid, Das told The NfN, “The subject has a vast scope of application involving the need of our day to day life as well as for the industrial needs from grass route levels to top. My plan was to explore its utility finding theory based mathematical model for practical application”.

Academics in the field of mechanical engineering and mathematics said that Kalidas Das is an eminent scholar in the field of nanofluid dynamics. “His works are mainly based on the theoretical analysis of the performance of heat and mass transfer capacity of nano-fluid with various range metallic, non-metallic nano-particles under numerous physical conditions. His whole focus was to bridge the gap in the related theoretical field and enrich the knowledge for next to come”, said a Professor attached to Kalyani Government Engineering College.

“His theoretical models enable us to develop cutting edge heat transfer and mass transfer tools. Heat transfer tools using nanofluid can be used to develop the most suitable coolant for the machinery, to produce highly efficient heat exchangers, to use as a coolant for grinding industries to elongated life for the machinery, to meet challenges of fuel cells heating problem, to drain energy from solar collector”, said the Professor.

Das’s theoretical model has proved how to improve the applicability of nanofluid in the field of medical science. “It can elevate the drug delivery capacity of fluids in a more controlled and well-directed manner using magnetic nanofluid. Microfluidic equipment has been developed to deliver drugs to targeted cancer cells for cure or research purpose”.

While speaking to The NfN, Das laments for not being able to implement his research findings in a practical way under personal supervision. “It would have been better if I could make collaboration with scientists and experts in the field of application to implement the theoretical models of different utilities of nanofluids for the welfare of the society”.

Professor Pintu Banerjee, secretary of Teachers’ Council of Krishnagar Government College said, “Professor Das’s recognition has made us proud. It will remain a great instance even after undertaking the stressful job of teaching at a rural college. I am hopeful that his feat will inspire other teachers”.