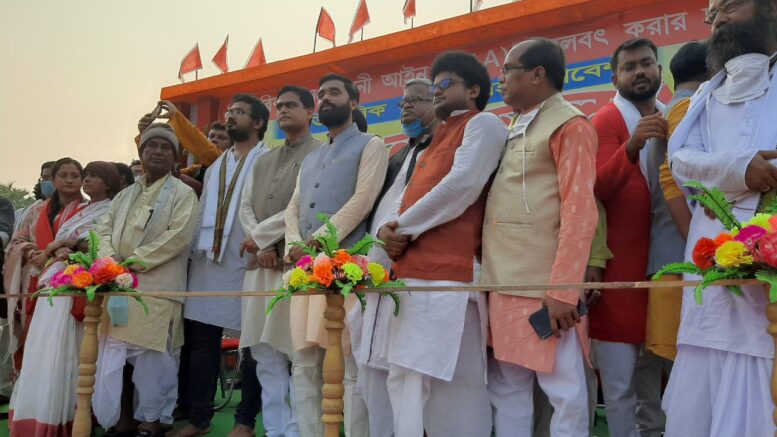 The Matua leadership in Bagula

Bagula, Nov. 19: The All India Matua Mahasangha, that represents a large section of the Matua community with leaning to the BJP have asked the party at the centre to announce a time frame to begin the process for implementation of the Citizenship Amendment Act (CAA) that given political dividend to the party.

The AIMM leadership said that the BJP which was largely benefitted through their support to the CAA during 2019 Lok Sabha poll, should come out with a specific time frame so that the citizen act is not just confined in black and white paper since it has been facing embarrassing questions from the refugees about that actual implementation of the act which could ensure their citizenship rights.

The demand for the time frame has apparently caused serious embarrassment to the Bengal BJP. AIMM chief Subrata Thakur himself is a party MP from Bangaon and his brother Subrata had also earlier unsuccessfully fought from the same seat as the party nominee earlier in a bye-election.

The demand for the time frame was raised from a meeting organized by the AIMM in Nadia’s Bogula on Thursday afternoon attended by over ten thousand community member that was addressed by organization chief Santanu Thakur and his brother Subrata Thakur.

Santanu Thakur had earlier this year written to Amit Shah requesting for early implementation of the CAA.

Raising the demand for the time frame the AIMM has launched a pan Bengal movement with a plan to organize over a dozon of meetings in South and North Bengal covering about 10 lok sabha seats. At least six such meeting are scheduled in North Bengal during December.

The demand for the time frame for implementation of the CAA raised by the Matua body at a time when a few days ago chief minister Mamata Banerjee announced formation of ‘Matua Unnayan Parishad’ with a grant of Rs.10-crore and also declared issue of patta to the refugees to ensure their land rights.

The AIMM leadership are apparently afraid that if the implementation of the citizenship act is delayed, it would be difficult for them to keep the flock together ensuring their support in favour of the BJP.

“Many refugees have been suffering from frustrations due to delay in implementation of the CAA. It has become tough for us to reply the questions of our people about the exact time and uts process of implementation. The CAA was instrumental to garner support for BJP that benefitted the party in 2019 poll. So the delay comes as very embarrassing. The centre should preferably within three months announce when the process for implementation of the citizenship act would begin”, said Mukutmani Adhikari, AIMM Nadia south committee president.

“We know it is a difficult process..but it should at least begin now”, he added. “From core of our heart we want victory for BJP in Bengal in 2021…at the same time refuges from Bangladesh have been living without identify for about last 74 years…so they are being afraid of the delay”, Mukutmani, who was nominated as BJP candidate from Ranaghat for Lok Sabha poll, but could not fight the poll for technical reason said.

Speaking at the rally AIMM chief Santanu Thakur said, “The CAA can only solve the problem of the refugees. Some people misleading the refugees offering patta, but that can never ascertain the citizenship. We want the centre take initiative to implement it fast. But the delay made people restless as they are asking questions. We are trying to make them understand”.

He advised the member devotees to have faith on centre and not to be misguided by the any political party.

Mukutmani Adhikari, however, did not hide his despair as he told The NfN, ” “It would be difficult to hold back the support base if the CAA is delayed…since political rivals could misinterpret and misguide the refugees”.

About 30 assembly segments in Nadia and North 24 Parganas Matuas are the dominant factors as they form about 45% of the electorate, divided in two factions with political leaning to BJP and Trinamul. In the 2019 Lok Sabha poll, BJP had won Matua support apparently offering them long-awaited citizenship through the CAA. The promise was given dividend to the party as it won two Matua dominated Lok Sabha seats – Bongaon and Ranaghat.

“It is right time the centre should act since a political party trying to mislead people luring them with patta. But a patta can never be a substitute”, Santanu Thakur added..