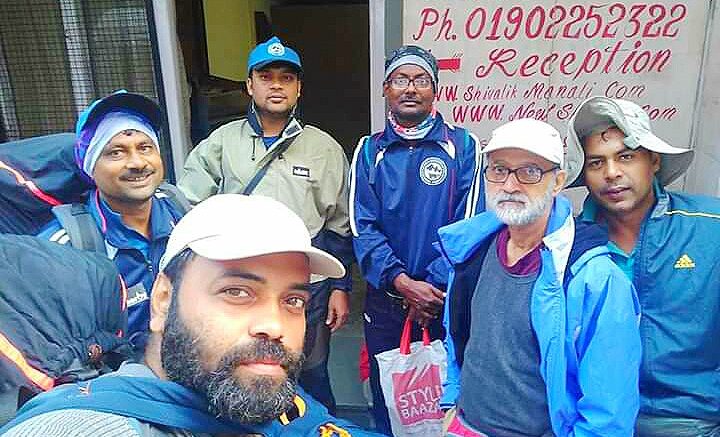 Saheb (in front) with other team members

Krishnanagar, Sept. 21: A Krishnagar based mountaineer had died while climbing 20551 ft high (6264 meter) Mount Chandrabhaga-13 in the West Himalayan range apparently due to respiratory trouble on Friday. Saheb Saha (37), alias Biswarup a resident of Krishnagar Ukilpara, who was attached to Krishnanagar Nature & Adventure Lovers’ Association (KNALA), died near Batala in Himachal Pradesh, when some porters were bringing him down for treatment from a base camp located at about 10000 ft high where he fell ill on September. He was later taken to a hospital in Kaza where doctors declared him dead.

The Kaza police later took the body for post mortem which was conducted on Saturday. The Lahul district administration later arranged an ambulance and transported the body of the climber to New Delhi airport, which will be flown back home in Nadia on Sunday evening. The sub divisional magistrate of Kaza had monitored the entire process.

The Bengal government is in touch with the Himachal counterparts for smooth return of the body back home.

On September 10, a 13 member team of Krishnanagar Nature & Adventure Lovers’ Association left Nadia for the Chandrabhaga 13 expedition via Manali and Batala with a message for cleanliness drive for Himalaya.

Located in the Himalayan range in Himachal Pradesh, the Chandrabhaga 13 peak on Dhaka glacier is very attractive among the climbers. The main approach route is from Batala from where the team began their expedition.

The main expedition had begun from Batala on September 14. Trouble began on September 19, at a base camp at 10000 ft high when Saheb, a distributor of Jio mobile service had fell ill, a day after he celebrated his 37th birthday there. to bring him down to plains when 3 of us only proceeded for summiting. Two porters started bringing him down. On the way, he was taken for some medication at Centre for Antarctic and Ocean Research in Sutri Dhaka on Chandra basin. He was kept there for a day. But on Friday, on way to Batala during the return journey he fell ill again and died”.

“Saheb was experienced climber and had undergone basic course of climbing and had also climbed in the same Himalayan range barely a year ago”, Sahajahan added

Meanwhile, a pall of gloom has descended in Ukilpara in Krishnagar and his native town Chapra. Neighbors were seen comforting Saheb’s wife Laxmi Tamta Saha and their 9 year old son at their flat in Krishnanagar Ukilpara.

“Summiting at Chandrabhaga was his dream and to achieve it he prepared well. But, I don’t know how all these happen”, Saheb’s wife Laxmi said while breaking down in tears.