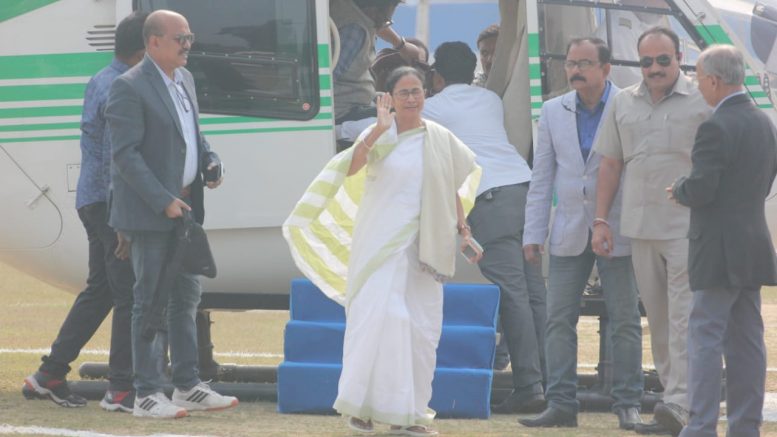 Ranaghat:  Chief minister Mamata Banerjee has instructed PWD authorities to put illuminated boards along the 80km stretch of National Highway 12 from Barasat to Krishnagar to appraise people that the state government is “sorry” for the trouble they have been facing regularly for its poor condition despite it tried best to find out a solution.

The Mamata government which took up the four laning works of the stretch from NH authorities and claimed to have submitted a detail project report is annoyed over the authorities as it is yet to get the DPR approved by the centre that is delaying the widening works.

On Wednesday during an administrative review meeting in Nadia’s Ranaghat, the chief minister told the PWD officials to overcome the “shame” by putting the boards at every1km breaks along the entire 80km stretch from Barasat to Krishnagar so that people do not blame the state government.

The chief minister also categorically advised PWD secretary Arnab Gupta the text that to be superscripted on the flex boards.

“Write….We are sorry…This road is belong to central government…We tried best to take over it. But we failed”, she told Gupta when he told Mamata that DPR is still pending with the centre.

She said, “We have had enough of it…the same Drama is going on for last three years. The centre prefers to remain idle and the woes of the people remain endless”.

The chief minister also instructed that the north 24 parganas and Nadia district administration to coordinate with the PWD authorities to install the board which should also be illuminated properly.

She said, “Get the boards printed on flex and put it in such a position so it well displayed and people can see it from distance. You must also ensure that the boards are illuminated so that can be viewed in night as well. Use LED light..This is economic…But bright”.

Chief Minister has also deputed two party MLAs to monitor the work so that no stretch is remained ‘uncovered’.

“In Nadia Ranaghat west MLA Sankar Singh would look after the work for Nadia and in North 24Parganas Jyotipriyo Mullick will be in charge of the same”, she said in the meeting.

Earlier during 2015 the Bengal government in same way put boards along NH apparently in a bid to avoid embarrassment for its poor condition that made traffic movement tough at many stretches for which the party led state government has no role.

A PWD officer on Wednesday said, “It is a sort of  initiative for “awareness” for the people so that they do not blame the state government for lack of care”. In 2015, the NH authorities handed over the 80-km stretch from Barasat to Krishnagar to state government. But, the DPR submitted by the PWD remained unapproved so far.

A PWD officer who attended the meeting in Ranaghat said, “It was on the initiative of chief minister we took up the widening work of NH. But, the work in the stretch so far could not be taken up only due to delay by NH authorities. Despite our repeated persuasion they have so far not approved the DPR…As a result the poor condition of the stretch remained unchanged while people being misled and blame state government’.

However, Project Director of NH in Krishnagar Sugata Sen said, “As far as I know the state government submitted a DPR for approval. But, there were a number of mistakes. They are yet to submit the rectified DPR. The approval of our higher authorities can be accorded only after that…”.