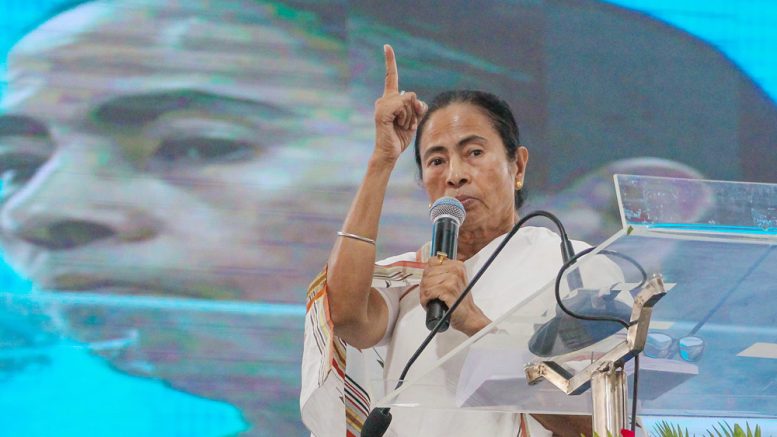 Krishnanagar, Jan. 10:  Chief Minister Mamata Banerjee on Thursday announced that the West Bengal has opted out of the flagship health protection scheme Ayushman Bharat as a mark of protest against sending entitlement letters by centre directly to the beneficiaries claiming the entire credit of the scheme allegedly to woo them ahead of Lok sabha poll.

She asked the centre to bear the entire expenses of the fund, as it has deliberately using Prime Minister Narendra Modi’s picture and claiming the entire credit despite it being a jointly contributed scheme.

Later in the evening additional chief secretary, health and family welfare (Government of WB) Rajiva Sinha issued a letter to the Secretary, Union Ministry of Health and Family Affairs formally appraising the state government’s decision regarding withdrawal from the scheme.

The Ayushman Bharat scheme, a National health protection scheme, launched during September last year and later renamed as Pradhan Mantri Jan Arogya Yojana (PM-JAY) aims to reduce the financial burden on poor and vulnerable groups arising out of catastrophic hospital episodes and ensure their access to quality health services. The scheme will cover over 10-crores deprived rural families and identified occupational categories of urban workers’ families as per the latest Socio-Economic Caste Census (SECC) data who will get a benefit cover of Rs. 5-lakh on family floater basis

Earlier increasing her tirade against centre by name, Bengal chief minister accused Prime Minister Narendra Modi of running parallel administration. She termed the direct communication by the centre as “interference” into state affairs apparently damaging the federal structure of the country.

In protest of the interference she announced that Bengal government would no more share its contribution to Ayushman Bharat. She accused the centre for politicizing welfare schemes to woo people by sending letters directly to the beneficiaries ahead of Lok sabha poll.

Mamata said, “We are being compelled to opt out of the scheme after I found that centre has been sending letters to lakhs of beneficiaries in the state with Prime Minister Narendra Modi’s image on it claiming its credit behind the scheme whereas it is jointly contributed scheme of centre and state on 60-40 ratio”

She was speaking in a meeting  organized by the Nadia district administration in connection with launching of a number of new projects. “We always play our role properly, but you claim credit for everything. You have been sending letter to houses across the state with a card inside. You claimed it done by you whereas the state government pays 40% of towards the premium. I today therefore in protest of your act decided to opt out of the scheme”, she said.

“You have been ignoring the role of the state government and making conspiracy as well with falsehood misleading people”, she alleged further.

In the official letter issued by the state government on the decision, the additional chief secretary has stated that it is surprising to see the name of the scheme in entitlement card as “Pradhan Mantri Jawan Arogya Yojona” instead of newly merged title as signed in the agreement.

“To our surprise the entitlement letter/card issued by your Ministry mentions the name of the scheme as PMJAY which is not only a violation of the stipulation of the MOU. But has created unnecessary confusion”, Sinha has written in his letter.

The state government signed the Memorandum of Understanding with centre in last year.

Party insiders, however, claimed it is well calculated decision of Mamata Banerjee as it apparently found ‘potential’ threat in Narendra Modi’s letter which is basically narrated the outlines of the scheme. In fact apprehending trouble, Trinamul workers in many places did not allow post men to deliver the letters. Lakhs of letters are dumped in several post offices across the state.

“The state government was in dilly dally earlier. It also opted out earlier but joined the scheme merging its own Swasthya sathi scheme with Ayushman Bharata, but now against decided to withdraw on political reason”, an agent said.

The state government after much dilly dally joined the scheme last year opting out initially with a new name merging the centre scheme with its Swastha sathi.

After launching the scheme during September 2017, the centre decided to send letters to all the beneficiaries across the country outlining the scheme details as a ready reference. The letter also contains a picture of Prime Minister Narendra Modi. But, the Trinamul identified the letter as a potential threat to it.