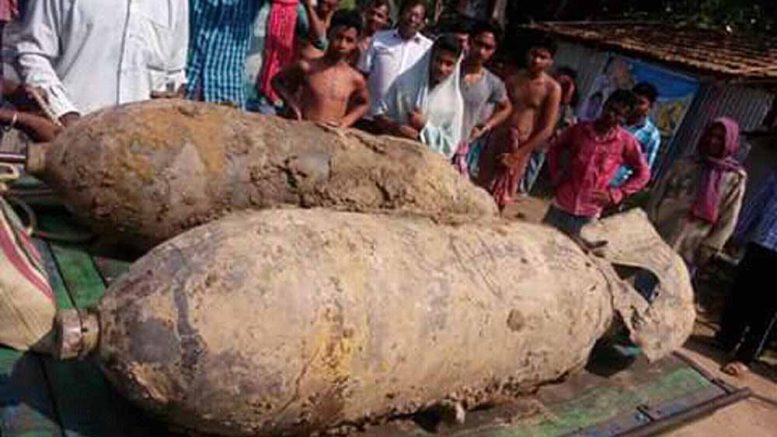 Hanshkhali, April 15: Two unexploded bombs, look quite similar to “general purpose bombs” (GP Bomb)  used by air force weighing approximately over 200kg were discovered during reclamation of a pond in Choto-Chupria village of Hanskhali on Sunday.

The vintage bombs, which are approximately 75 years old, considering its initial look of GP bombs, were hidden under the earth and triggered large scale curiosity among the local villagers. Bombs being taken to police station

Hanskhali police sources said that Yusuf Ali Mandal, a resident of Choto Chupria village, found the huge metal bomb when he was operating an earth excavator in the pond, which is locally known as “Bom Pora Pukur” (A pond where bomb was dropped).

Informed by Yusuf, Police rushed to the spot and recovered the bombs to ensure safety of the villagers. The bombs were later kept at an isolated place under protection for examination by the Indian army officials.

A team of ballistic experts from Fort William will visit Hanskhali and examine the bombs on Monday morning.

Additional superintendent of police (Kalyani) Tauseef Ali Azhar said, “It is not clear to us if the One of the bombs that found in pond

bombs were dropped by any war plane or these were the canon shells. We are inquiring about the local history, speaking to local people to ascertain the possible source of the bomb.  Several possible sources have surfaced up. However, none appears to be conclusive enough.

“We have kept the bombs in isolation for safety reasons preventing public access and informed the Indian army authorities. We expect that they will come soon with their experts to find out the actual nature and age of the bombs.”

The NfN, however, talked to some retired army officials, who claimed the bombs look quite similar to ‘General purpose bombs’ or GP bombs, which often used by air force for low altitude attack and for tactical applications. A GP bomb being loaded to aircraft

“The bomb found in Hanskhali look almost similar to GP bombs, dated late 1940s. The GP bombs are of medium capacity and weighs around 500-pounds (227kg). Explosive like Trinitrotoluene, known as TNT is used in such bomb made of thick metal cover. As the GP bombs once were used in low altitude attack by aircraft and had vulnerability to be attacked by enemy, GP bombs are often fitted with parachutes or pop-out fins that slow the bomb’s descent to allow the aircraft time to escape the detonation”, a retired army officer said.

Earlier Yusuf Ali Mondal, an excavator operator who found the bombs said, “I was operating an excavator when witnessed the massive object. I took it aside with the help of the laborers. It appeared to be bombs similar to ones I have watched in films. So I informed the police for its custody”.

A police team later put it on a motor operated van and brought it to Hanskhali police station. Later it was kept in isolation digging a pit on a ground near the police station as advised by the state police’s bomb disposal wing.

One of the bombs found in Hanshkali.

Police officers said that the name of the pond where the bombs were found itself speaks that bombs were probably dropped here sometimes in past. But, police found none when can throw more light on the issue.

Some elderly villagers who saw the bombs claimed that the bombs might be the left behind by the India army during the Bangladesh war of 1971.

The village Choto Chupria where the bombs were found is bare 2km from the Bangladesh border.

A villager Arman Ali Mandal, 51, said, “During the 1971 war against Pakistan, Indian troops frequently used Kaikhali-Bathangachi road. It could be the bombs from the Indian stockpile left behind by the Indian army”.

Sanjit Dutta, a retired librarian of Krishnanagar Public Library who has also written several books on history of Nadia said that the then British led police force had suspected a group of Indian freedom fighters who had plotted to destroy a railway bridge over Churni River in the region. “In 1942 British air force had dropped bombs in this region suspecting that the revolutionaries would blow up the railway bridge. But when the bombs were dropped nine laborers engaged by railways to carry out maintenance jobs, were killed. A few bombs had also missed target. The two bombs that were recovered today could from that raid.”

Officer in charge of Hanshkhali police station Anindya Bose, a sub inspector, however, does not rule out the bombs are dated back to World War II.