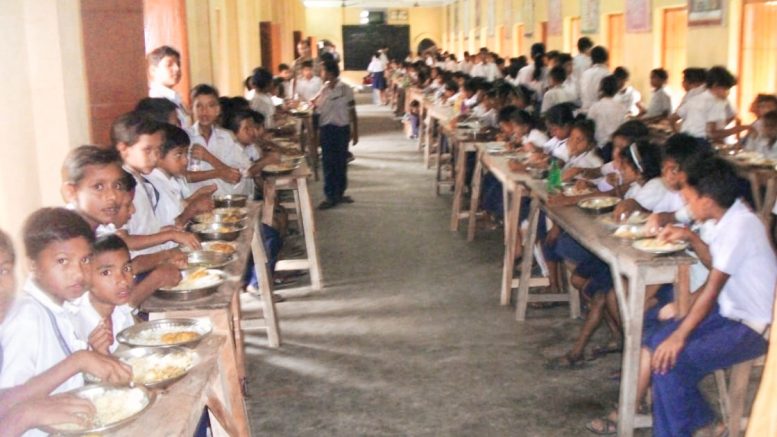 Kolkata, Oct. 09: A  hike of 9.6% in the material cost of the mid-day meal for students up to class VIII, announced by the centre on Friday, which in real term amounts to less than Rupee 1, has angered many teachers in the state who implement the scheme at ground level on regular basis.

These teachers, who are mostly heads of different institutions in Bengal, alleged that the hike in material cost is too “meager” to meet the nutritional needs of the pupil – specifically protein, vitamins, and minerals under the mid-day meal programme now officially titled as Pradhan Mantri Posnan Shakti Nirman (PM Poshan) that aims to provide one hot cooked meal in the government and government-aided schools across the country.

Many teachers in the state have termed this paltry hike as “ridiculous” and a “mockery” of the pupil’s nutritional needs. They have demanded more funds considering the increase in prices of cooking gas, pulses, vegetables, and other allied expenses. Otherwise, they have demanded that the state government should take up the “responsibility directly”, providing them exemption”.

On Friday,  after a gap of two years, the department of school education and literacy (PM Poshan Division) of the education ministry announced the hike with effect from October 1

As per the notification, the per-head material cost for students of the primary level has been increased from Rs.4.97 to Rs.5.45 (48 Paisa) and for students in the upper primary level from Rs.7.45 to Rs.8.17 (72 Paisa) in the non-NER states and in the union territories with the legislature. “This is a horribly ridiculous hike. I am quite doubtful whether the people who took this decision have at all any knowledge about the present market price of different essential commodities …”, said a headmaster in Calcutta.

“Now an egg itself costs Rs.6…so how can the government expect us to serve a nutritious meal just at Rs. 5.45…Serving mid-day meals has become a burden for us which we have been doing just to save our job”, the head teacher further said demanding the minimum per head material cost as Rs.10.

Last year the union education ministry set up a committee to review the cooking cost of mid-day meals and to chalk out a methodology for revision. The committee had members from the department of school education & literacy, the National Institute of Nutrition, the Ministry of Labour, and others, which announced the hike on twin sharing basis.

The gross per head cost includes the centre and state government’s contribution at a 60:40 ratio. This means that out of Rs.8.17 allocated for students in the upper primary section, centre would pay Rs. 4.90, whereas the state would share Rs. 3.27 as its contribution. For the primary students, the centre would bear Rs. 3.27 and states Rs. 2.18 out of the allocated amount of Rs. 5.45.

For the last couple of years, a number of teacher organizations and food rights activists across the country have been demanding more funds due to the soaring price of essential commodities so that the mid-day meal programme can run smoothly ensuring the nutritional needs of 11.8 crore student beneficiaries.

Chandan Maiti, secretary of the Advanced Society for Headmasters and Headmistresses, who is also headmaster of Krishnachandrapur High School in South 24 Parganas said, “We have been urging both the centre and state We for a long time to increase the per head cost of mid-day meal. We have demanded that per head cost should be at least Rs.10 to ensure a nutritional meal as per the prescribed weekly food chart. But, neither centre nor the state government responded at all.”

“We apprehended a better hike this time since the nutritional needs of students suffered badly due to the Covid pandemic despite the government’s initiative to distribute dry mid-day meals…but nothing such happened”, Maiti said.

Senior teacher and All Bengal Teachers Association (ABTA) state secretary Sukumar Pyne also echoed the same. “Both centre and state government should reconsider the per head cost of mid-day meal on a realistic basis. Both the governments putting pressure on teachers to ensure nutrition for students, but paying a throwout out amount for the purpose”, he said adding that schools with a handful of students would face a major problem.

School Teachers Federation of India, a platform of leftist teachers’ organization of which Pyne is the joint general secretary, has also appealed to the centre for a realistic hike. But, no reply has so far been received.