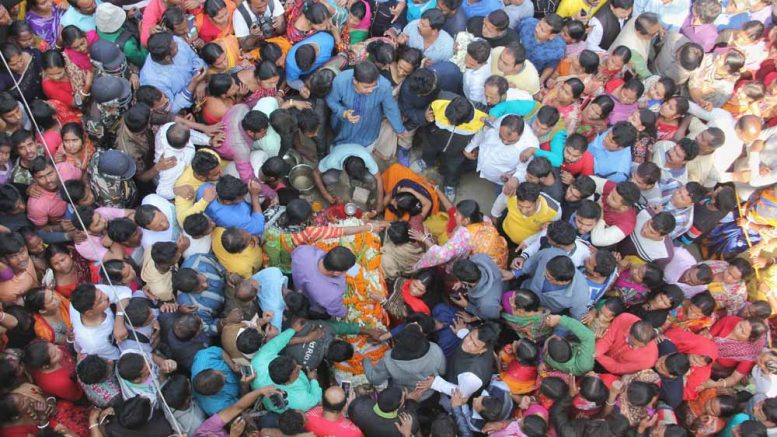 Hanshkhali, Feb. 10: Police have arrested one Trinamul Congress activists as well as a mentally unstable youth in connection with murder of Trinamul MLA Satyajit Biswas who was gunned down on Saturday night while watching a cultural programme near his home on the occasion of Saraswati puja.

The two arrested youths – Mithun Mandal (24) alias Kartick and Sujit Mandal (29), both residents of Majidpur village, were named in the FIR along with three others including BJP leader Mukul Roy by one Milan Saha, a close aide of deceased MLA who claimed to be eye witnessed his murder. Apart from Mukul Roy, the two others named in the FIR are Kalipada Kundu and Abhijit Punduri, who allegedly shot at the MLA and named as the prime accused. Both Abhijit and Kalipada went absconding. Abhijit is a known Trinamul worker in the Phulbari Mazidpur area, whereas Kalipada is a disgruntled Trinamul supporter who recently developed proximity to BJP.

Meanwhile, officer in charge of Hanshkhali police station Anindya Bose has been suspended on Sunday by the district police administration for his dereliction in maintaining law and order that apparently indulged murder of Trinamul’s Krishnaganj MLA Satyajit Biswas on Saturday night during a vital programme near his home in Phulbari village. The district police administration have also suspended constable Prabhash Mandal, personal security staff of the MLA, for negligence in duty as he went on leave without any official intimation to the higher authority, a day before keeping the authorities in dark that could not make any alternative security arrangement for him.

Both Kartick and Sujit were produced before the additional chief judicial magistrate’s court on Sunday, which ordered two weeks police custody for them.

While police is yet to ascertain the possible motive behind the murder, its preliminary findings suggests that a personal rivalry with absconding Trinamul activist Abhijit Punduri, could be a motive behind the murder. Party sources in Phulbari said, the demised MLA had beaten up Abhijit during Kalipuja last year, after a number of complaints were lodged against him for illegal collection of money exploiting his position from students Bogula based Srikrishna College.

MLA’s brother Sujit Biswas said, ‘Abhijit was involved in financial malpractices as TMCP activist in college for which Dada warned him. In one occasion he lost his cool and slapped him. But, it us beyond our imagination that he could conspire with BJP to kill him’.

Abhijit’s elder brother Prasenjit and neighbors, however, refuted the allegations. “As far as I know he was a Trinamul activist. I have seen him with BJP. He is unemployed and failed to get a job, had recently joined our father to help him in agriculture works. I don’t believe he could kill the MLA”.

Other accused Kartick Mandal (24), son of a day labour, is also a Trinamul activist. But, he was also beaten up recently by the MLA as he was gradually making distance with party.

His wife Sunita said, ‘For the last three months he never had gone out of home being busy in sewing vests. He bought sewing machines and also engaged a local youth to work in our workshop. On Saturday, he was confined at home being busy in work, but police came at about 9pm and took him away. My husband has been implicated falsely”.

Other arrested youth Sujit Manual’s widow mother Bhanu Mandal said, “My son works as a lorry cleaner. He was about a year ago active with BJP. But, since a psychiatric problem developed he gradually became isolated. Now he is under treatment. How can my son kill the MLA”.

Local sources said that Sujit was nabbed by Trinamul workers and handed over to police while running away in panic with other locals hearing the gun shots.

However, Trinamul Nadia president Gourisankar Dutta reiterated that BJP workers killed the MLA. “There are at least four on the spot. Three hold the MLA strongly, while Abhijit fired from point blank range”. Mita Biswas, a woman, who was sitting close to her, however, said, “Satyajit seated close to me. There was loud music. I suddenly saw he collapsed on the ground. I thought he suffered a heart attack, I rushed to him and tried to hold him strong when found he is bleeding from forehead”.

Trinamul secretary general Partha Chatterjee said, “We have told police to spot the culprits soon and to ensure strong punishment whosoever involved behind the murder.”

Chatterjee along with party’s Nadia observer Anubrata Mandal visited the MLA’s home on Saturday, .Et his wife Rupali and parents and assured all possible support.

Chief minister Mamata Banerjee had also called Rupali. But, she could not talk to her. “She talked to his parents and said she would call again later”, a family member said.