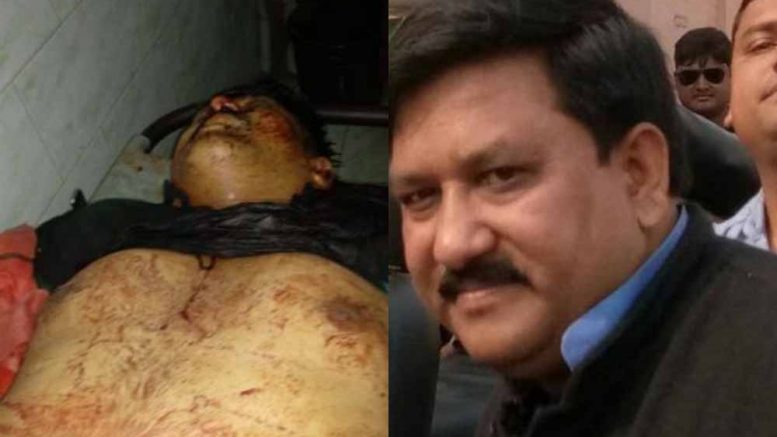 Hanshkhali/Krishnagar, Feb. 9: Prominent Trinamul Congress youth wing leader and party MLA Satyajit Biswas (38) was shot dead by unidentified assailants when he was watching a cultural programme organized by a local club on the occasion of Saraswati puja near to his residence on Saturday evening in Phulbari village of Nadia’s Hanskhali.

Biswas, who represented Krishnaganj (SC) assembly constituency was shot at head from close range by the assailant, who managed to flee after the incident that occurred at the crowd packed venue hosting a cultural programme. A school clerk by profession, Biswas was first elected through a bi-election in 2015 and later in 2016.

Biswas attended the inaugural programme along with his wife and one year old son at the venue, where party MLA and Minister Ratna Ghosh was also present as the guest. The incident occurred around thirty minutes after Ghosh and other dignitaries left the venue after inauguration when Biswas was watching the cultural programme along with other local residents in the area.

Eye witnesses claimed that Biswas was shot once on his head amidst the crowd and fell on the ground. He was rushed to Nadia district hospital in Krishnagar, where he was declared dead.

Police started a suo moto murder case based on the witness account, even though the sleuths are still dark about the actual motive behind the murder. The Nadia district Trinamul leadership, however, termed the murder as an outcome of ‘political vendetta’ apparently masterminded by BJP leader Mukul Roy and his loyalists. Trinamul insiders, however, indicated that the murder is fallout of party’s internal bickering.

Party’s Nadia district president Gourisankar Dutta said, “We have reasons to believe that Mukul Roy conspired the murder. He with his men planned to eliminate him. Party supporters would give him befitting reply for this. We will also lodge specific police complaint against him along with other involved behind the murder”.

Police have recovered the fire arm purportedly used in the murder, but could not arrest anyone so far in connection with the murder.

Two youths roaming suspiciously after the incident in the area were later nabbed by the local youths, who were handed over to police and being interrogated when the report last came in.

Nadia BJP’s North unit president Jagannath Sarkar refuted the allegation. “Let the police investigate properly and find out the people behind the murder. We do not encourage and indulge politics of murder. This is not our party culture. The Trinamul would lose its face when the bitter truth would come out”.

The state government has already sent a CID team from Kolkata to investigate the incident.