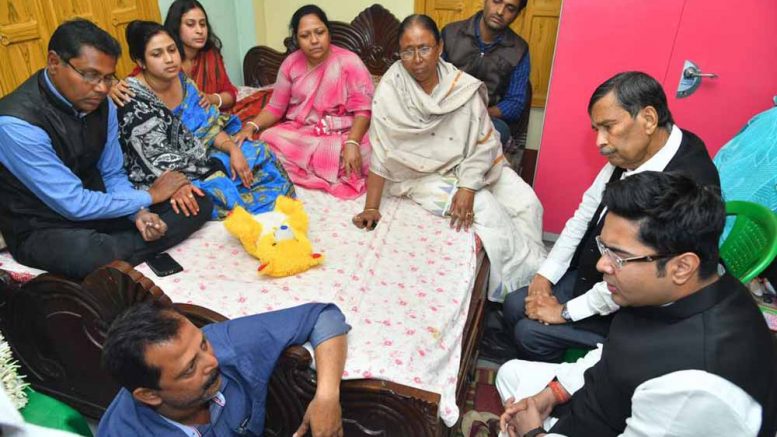 Hanshkhali, Feb. 11: Police have so far quizzed 12 local residents of Phulbari Mazidpur village in Nadia’s Hanshkhali, who were present when Trinamul MLA Satyajit Biswas was gunned down by unidentified assailants on Saturday night during a cultural programme on the occasion of Saraswati puja. However, the interrogation failed to throw any light into the investigation as statement of those were quizzed appeared to be inconsistent and different from the other. Whereas the sleuths still find it tough to link the MLA’s murder as a conspiracy by senior BJP leader Mukul Roy, Trinamul leadership even on Monday reiterated his role into the murder. Party’s youth wing president Abhisek Banerjee accusing Roy of conspiracy said without naming him, “If anybody commits crime and expect to be spared using his Delhi links, he would be thinking wrong. I will ensure to drag him out and put behind the bars”.

“There are several inconsistencies in their statement. None of the persons who claimed to be eye witnessed could exactly portray the murder. None has also seen who fired the MLA. Even the complainants’ account could not help us either to unlid the mystery. Our prime objective is to find out Abhijit who was seen fleeing after the murder to ascertain his involvement and the possible motive behind the murder’, a senior police officer of the investigating team said.

The district police have made three separate investigating teams, which have started raiding possible hideouts of the two absconding youths, particularly of Abhijit Punduri, who allegedly fired at the MLA.

Meanwhile, the investigating officer of the murder case Tapas Ghosh, a sub inspector, has been given charge of Hanshkhali police station. An insider in District police said, sleuths have already visited several places in Nadia and North 24Pargana district, but could not trace out prime accused Abhijit Punduri.

Speaking to media persons he said, “The murder of Satyajit Biswas is a well hatched conspiracy of BJP. We have identified the killers, who are all BJP activists. We will ensure their punishment” Accusing BJP leader Mukul Roy as the mastermind without naming him, he said, “If anybody thinks that that he would commit crime and will be spared managing leaders in Delhi, he would doing wrong. We will drag out him and put behind the bar”.

Asked on what basis Roy has been named in the FIR, Banerjee said, “I talked to the complaint Milan Saha, who thinks he has definite involvement behind the murder so he named him in the FIR”

“Daal mein kuch kaala hai. Please wait there are many mysteries to be unveiled soon”, he added.

Both Abhisek Banerjee and Matua Mabasangha leader Mamatabala Thakur alleged that the MLA was killed because he became the face of the matua community.

Mamatabala Thakur, Trinamul’s Banagram MP, who also visited the slain MLA’s home on Monday said, “Satyajit earned the wrath of BJP because he was reuniting the Matua community in which BJP created divisions by misleading a section of the community”.

“BJP was trying to make inroads by misleading some people, But Satyajit thwarted this attempt ..’, she alleged.