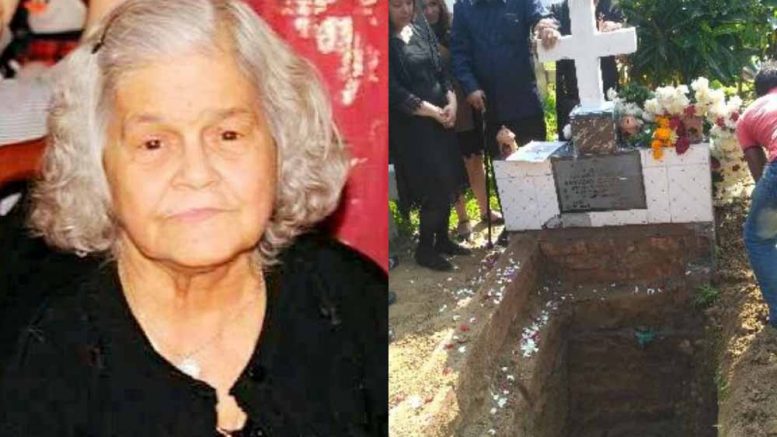 Kalyani, Dec. 27: An elderly Irish woman born in India, who spent over 50 years in teaching in Kalyani and Calcutta, but migrated later to UK, was flown back to the city from Birmingham in a casket on Wednesday, only to rest in peace as per her wish at a cemetery in Arvedipur near Kalyani next to her husband. Merryl being taken to burial ground

Born in 1932 in Dongargarh of Madhya Pradesh to a Irish couple, Merryl Rebecca Galstaun (86), one of the founder teachers of Julien Day schools in city, who once with her husband Peter Anthony Galstaun had helped Mother Teresa to set up a free school at her home at 14-Ripon Lane, died at a hospital in Birmingham on December 12.

To respect her last wish, her sons and grandsons today brought her body transporting over 5000 km from Birmingham to Kalyani to bury her next to husband at Arvedipur cemetery adjacent to Don Bosco Catholic church, where the she used pray during her 12 years stay in Kalyani as the teacher of Julien Day school.

In 1947 Merryl married Peter, a sergeant with British Indian army. He later joined Calcutta Police. After retirement he set up private hostel in Kalyani, where Merryl when Julien Day’s Kalyani unit opened. She stayed there until her husband peter died in 2002 and buried at Arvedipur church.

Russell Gaulstaun, one of Merryl’s grandsons and a teacher in Sasaram said: “After grandfather’s death she had to shift to Birmingham as most of our family members settled there. She was not eager to go there. She directed us to bring her body back to bury in Kalyani” The farewell service at the Don Bosco Church

Max Galstaun, one of Merryl’s son said: “My mother told us to bury her close to my father so that she could be reunited with him after death. So we brought her body to Kalyani to respect her wish”.

Richard Green, head master of Julien Day school-Kalyani, who joined the funeral today, said: “It is like end of an era. Merryl was a true educationist and a great human being whose only passion was to educate people”.

Today the body first arrived at Don Bosco Church in Raghunathpur at about 10am in a casket, where Father Francis organized the farewell service. Later the body taken to Arvedipur burial ground adjacent to church.

Her grandson Anthony Khatchaturian, a journalist, said: “Today a void created in our family with the departure of my grand mom. She was true guiding spirit to us and many students and their parents”. The casket being taken to burial ground

Merryl’s eldest son Max Galstaun said: “It was in 1948 my mother and father Anthony Galstaun, helped a young Albanian nun to set up a free school in the balcony of our home at 14-Ripon Lane. The school was later accommodated in our courtyard as the number of students increased. Two years later, this nun created the Missionaries of Charity and today she is known as St Teresa. She was a great friend of my mother”.

During early 60s, she joined Saifee Hall as teacher. She also taught at Ashok Hall before joining Julien Day in 1969 being one of the founder-teachers of its first unit in city. In 1988, she shifted to Kalyani when Julien Day opened.