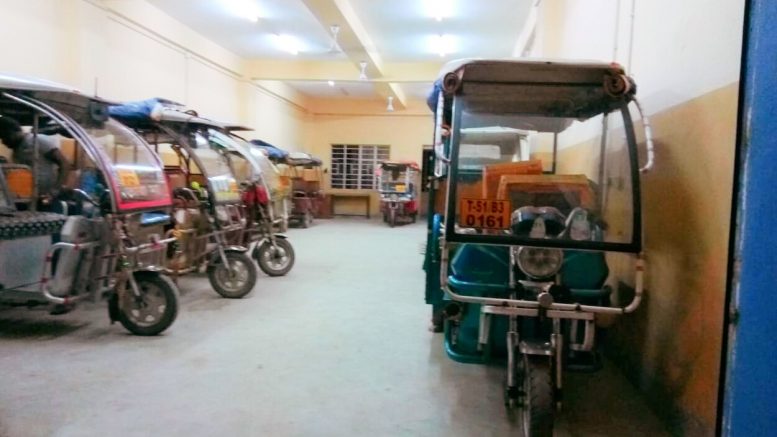 Toto parked inside Tehatta ITI campus to be recharged

Tehatta, Aug. 14: Authorities of an Industrial Training Institute (ITI) set up under public-private partnership (PPP) model in Nadia’s Tehatta have been misusing the electric power provided by the state government at the campus to earn money illegally by recharging the batteries of nearly one hundred Toto every night.

The toto operators in Tehatta town after end of their day’s service regularly enter ‘Tehatta Government ITI’ campus located in Duttapara, to park their vehicles inside lounge for the night and get their batteries recharged against a meagre payment of Rupees ten only. A security guard and a non teaching staff monitor the recharging.

While the college principal and the ‘private’ enterprise that involved with the ITI claimed that the state government has empowered them to take such money to generate ‘revenue’, minister for technical education, training and skill development Purnendu Basu rubbished the claim terming it as “illegal practice”. “Necessary action will be taken against them”, Basu told NfN.

The Tehatta Government ITI set up in 2012 with ‘Society for Welfare and Development of Human Initiative’ (SWADHIN) as ‘private’ partner became operational during 2014. Toto operators in Tehatta said, the ‘recharging’ facilities made available to them by the college authorities early this year. “Initially there were about five totos which used to get recharged there. But, the number increased gradually as most of the toto operators found the college campus suitable for night parking as well as recharging at such a minimum cost”, a toto operator said.

Paritosh Biswas said, “I have been using the facility for last four months. Earlier I used to take my vehicle back home every night and recharge there”.

When asked if the college authorities can allow such recharging by using government provided facilities, principal Kundan Kumar said, “We are empowered to do this being the private partner of the college. There is state government order to this effect which empowered us to provide such service and take money as well. Even technical education minister Purnendu Basu knows it well”.

Soumen De, a representative of SWADHIN also claimed that the college is empowered to allow toto to use its electricity.However, both o them, refused to show any such order.

Minister for technical education Purnendu Basu said, “There is no such order at all. If the department had issued any such circular that would definitely be in my knowledge. At least I have never signed any such circular. This is illegal and I will take necessary action in this regard”.

“The duty of the private partner is to impart training and not to exploit government facilities for their own financial gain” – Ujjwal Biswas, former Technical Education Minister.

A senior officer in Nabanna said the role of the state government in PPP model is that of a facilitator. “This include among several other thing is to provide land, supply of power, water at the project, whereas the private partner’s role is to impart education arranging faculties at its own cost and management under government regulations”, the officer said