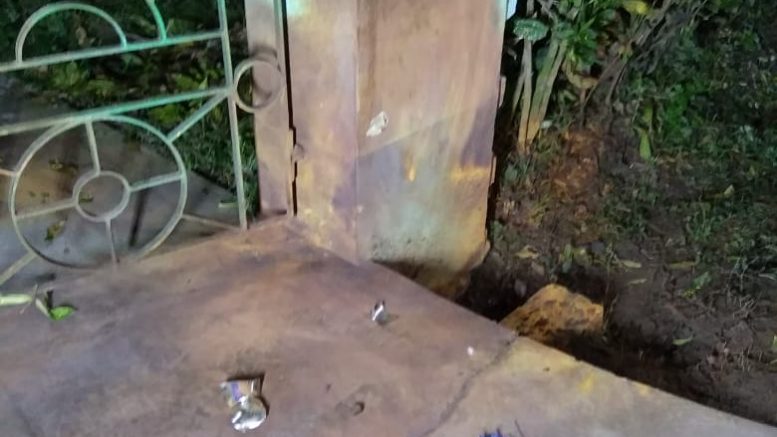 Chakdaha, Sept. 7: Prominent Trinamul Congress leader and chairman of Chakdaha Municipality Dipak Chakraborty had escaped an attempt on his life as unidentified miscreants hurled bombs targeting him at around 00.15 hours on Thursday night when he was taking care of his pet dog at the courtyard of his house in KBM area of Chakdaha town.

The miscreants who were three in numbers had allegedly hurled at least three bombs while passing close to his house riding a scooty at slow pace and managed to flee before people could realize what actually happened. Chakraborty, who is president of Trinamul’s town committee, however, lucky enough to escape unhurt as all the three bombs missed the target and exploded after hitting the boundary wall. None of the family members of Chakraborty were also injured in the attack.

The incident sparked tension in the area as the neighbors and local Trinamul supporters rushed in to Chakraborty’s house. A team of Chakdaha police also arrived at the spot. The police team collected the splinters and cover of the exploded bombs for investigation.

Chakraborty said, “It is really shocking that miscreants roaming in the town so freely….Unfortunately a section of the police is giving indulgence to these miscreants”. He, however, claimed ignorance about the identity of the miscreants who were behind the attack.

Local sources said, three youths with a scooty were seen waiting close Chakraborty’s house. At around 00.15hours, a few second after Chakraborty came out to the courtyard from inside with his pet dog after dinner, the miscreants came closer to his house and hurled three bombs in quick succession before fleeing.

Trinamul insiders, however, did not rule out the incident as fallout of the continued internal bickering between Chakraborty and another influential section of the party in the town, which has blessing of some senior party leaders. Sources said, the erring rivals have been fighting for over one year for political supremacy in the town which the top leadership of the party including Nadia minder Partha Chatterjee even failed to contain despite his repeated cautions. “The rivalry is gradually going beyond control and become a bloody affair which will miserably affect party’s prospect in the ensuing civic body election and later in the Loke Sabha election as well”, a senior leader said.

The Chakdaha police authorities, meanwhile, when contacted confirmed the attack on Chakraborty’s house. However, it claimed that no complaint has so far been lodged by Chakraborty on the incident.