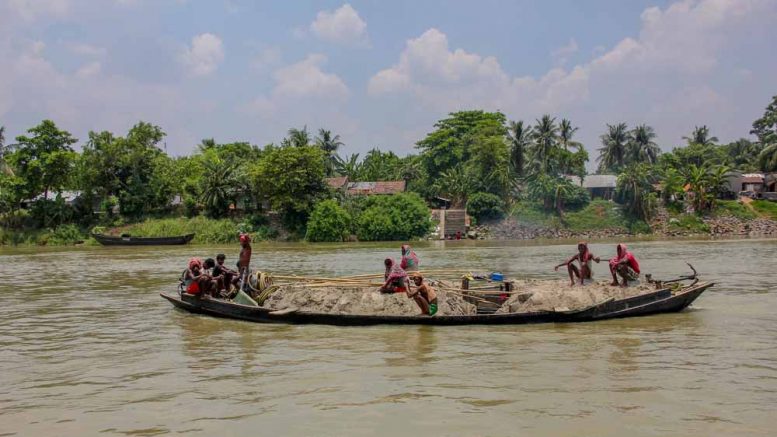 Illegally lifted sand being ferried on a boat in Santipur

The district administration embarrassed being failed to curb illegal mining of sand despite repeated raids have also planned to evolve a continuous monitoring system involving police, officials of state irrigation department, land reforms department and local people. Sources in  administration claimed that the importance of the CCTV installations and composite monitoring have been taken up following a number of gram panchayat authorities urged the administration to control the menace as sand mining has made several areas prone to erosion putting lives and properties of thousands of villagers in danger.

In last week the district administration taken up the decision in a meeting with officials of irrigation department, L&LR department, police, panchayat officials. The local people will be involved into the initiative for better monitoring.Officials present in the meeting said it has been decided to install the cameras in all the riverside areas from where sand mining is done including the authorised spots.

The district administration has decided to identify the spots for installation of the CCTV cameras across the district within seven days and to complete the job by end of  September. Sand lifting at an illegal mine in Chakdaha

District magistrate Sumit Gupta said, “A team of police, irrigation and officials of general administration has been assigned the job to identify he vulnerable spot as installation points of the CCTV cameras.  The job will be completed within seven days”.

“Our aim is to complete installation by end he end of this month. Once spots are identified and number of cameras are settled, an estimate will prepared for obtaining fund from state government”, DM added.

Rules prohibit any sand mining from the river bed and within 200 metres of a river alignment. Lifting of sand is only authorized by state irrigation department.

[State irrigation department approve lifting of sand for a limited period of 90 days only for a maximum quantity of 50000 cubic foot against a payment of Rupees 39500. An additional fee is charged for every challan of supply, said an officer of Irrigation department].

However, miscreants using their political clout have created many sand mining pits on Hooghly, Bhagirathi and Jalangi river in the district. Sources in district administration said, number of sand pits are maximum in Kalyani, Ranaghat and Krishnagar sub divisions.

Sub divisional officer of Kalyani, Unis Rishin Ismail said, “We on regular basis conduct raids, arrest people involved with it and seal the sand pits. But, miscreants resumed their work after an interval. We have decided to stop this practice permanently through a continuous monitoring system. To make this possible, we would involve local people into the initiative”.

“The vulnerable spots will now be under continuous surveillance with support of CCTV. Local villagers will be involved so that they inform police and irrigation officials whenever any pit is noticed. No illegal mining of sand will be allowed any more”, the SDO said.

Sources said that rampant mining of sand in several areas under Chanduria-1 and 2 panchayat have created major resentment among the villagers. They villagers alleged that the illegal mining of sand put their lives in danger making the area very prone to erosion. On February 18, 2016, locals in Kalipur area turned violent and attacked workers at an illegal sand mining pit on the bank of Ganga. They set ablaze two tractors, a lorry, and an earth removing machine and ransacked at least three houses of sand mafias.

After the incident, police with officials of irrigation department conducted raids. But, the mining resumed again. A village in Shimurali said, “The sand mafias have nexus with police and political leaders. They are uncontrollable and protect pits with arm guard. Due to such mining erosion in Chakdah block increased alarmly”.

A police officer present the meeting said, “Police, civic volunteers will be included in the composite strict monitoring”.