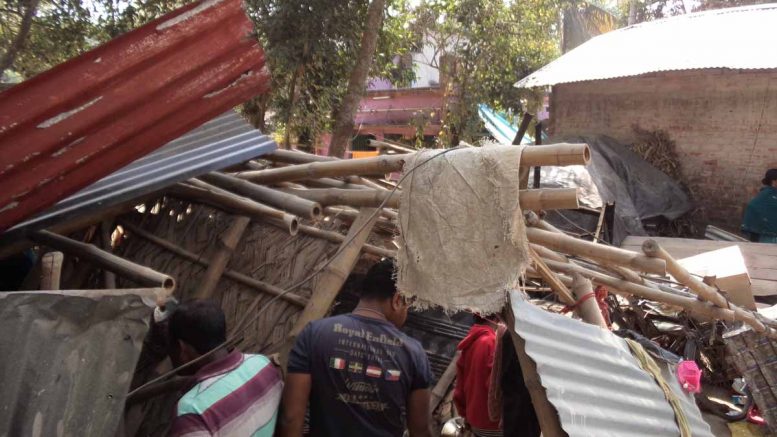 Hanshkhali, Feb. 12: A group of suspected Trinamul Congress supporters went on rampage and demolished the hut of Sujit Mandal, one of the accused in MLA Satyajit Biswas’s murder, in Nadia’s Phulbari on Tuesday morning. The Trinamul supporters had allegedly dragged out Sujit’s septuagenarian mother from the hut and ransacked it before demolishing it with bamboo poles and bricks.

The mob recovered pictures of Narendra Modi, some old sim cards, BJP party documents and a diary containing some phone numbers which they later handed over to police alleging BJP connection with the MLA’s murder.

A police team led by Ranaghat sub divisional police officer Laltu Halder later arrived at the spot and dispersed the mob, while some neighbors provided shelter to the elderly woman.

Sujit Mondal, who is undergoing treatment for psychiatric problem and delusion, was named in the FIR and was arrested a little after the MLA was shot dead on Saturday night.

“We have doubts about Sujit’s illness. He is quite active and often speaks in favour of BJP. We today came to search his home, but the local residents lost cool being aggrieved of Satya da’s murder”, a Trinamul supporter said.

A neighbour said, “Sujit used to work as khalasi of lorry and used travel across India. So his contacts outside Bengal are not anything unusual”. Sujit’s mother Bhanu Mondal breaking down in tear, said, “The Trinamul supporters entered my house, abused me and dragged me outside to begin rampage. They were asking me where my son hidden arms. They dug up grounds, broke furniture and collected some documents to accuse my son as a murderer because his onetime proximity to BJP”.

“My son became disgruntled with Trinamul  and developed proximity to BJP a few years ago. For this he was beaten up by MLA. But since he developed psychiatric problem his association with BJP was severed. He is mentally ill now”, she added further.

Medical documents of Sujit Mandal shown by her mother Bhanu indicates that he was suffering from seizure apparently due to abnormal brain nerve impulses.

Sujit was taking Oxcarbazepine (Oxcazo OD300), Zulpride apart from other medicines. A doctor said of a state government hospital said, “Oxcarbazepine is used as remedy of seizure and as a mood stabilizer. It is particularly helpful for the manic, agitated, irritable, hyper or rapid cycling phase of mood. Zulpride is an atypical anti-psychotic med hallucinations, delusions etc that may be associated with mental disorders like psychoses etc. However, such patient can react strongly in excitement’.

A neighbour of Sujit said, “Sujit was suffering from mental problem for about a year and not seen him politically involved’. A police officer said, “Sujit is being questioned under police custody. We will examine his physical condition too”. Police, however, did not arrest anybody for the rampage at Sujit’s hut. “None from his family lodged any complaint so far’, an officer of Hsnskhali police station said.

Meanwhile, police could not so far trace out prime accused Abhijit Punduri despite a number of raids at several places in Nadia and North 24parganas. Police also tracking his social media profiles for a clue, but could not succeed.