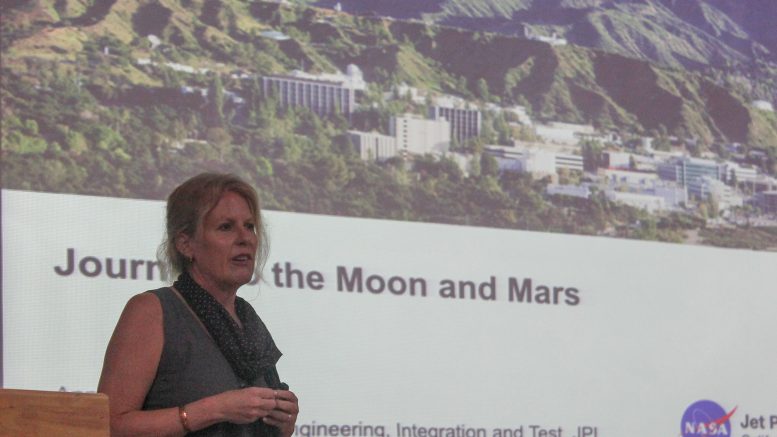 Mohanpur, Sept. 25: The failures make the learning experience and help to overcome the mistakes. Ann Devereaux, a spacecraft system engineer at NASA and the lead flight system engineer of its Mars 2020 mission said this on Wednesday while delivering a public lecture at the Center of Excellence in Space science India of IISER-K in Mohanpur. The leading system engineer responsible for command and control of spacecraft refused to make any comment on failure on ‘Vikram’, ISRO’s Chandrayaan2, but stated that failures in a space mission are not unusual for to its critical process.

Sharing her experiences of failures of many past space missions, Ann said, “The failures make the gateway to success. The learning experiences help to overcome the flaws and helps in missions in the future”. She, however, excited about the ensuing NASA-ISRO joint mission titled NISAR which will determine earth changes in some specific aspect.

She was speaking on ‘Journey into Space’ organized by the Indian Institute of Science Education and Research-Kolkata’s ‘Centre of Excellence in Space Science in India’ in association with the American Centre, US Consulate in Calcutta. Ann with students of IISER-K

Ann attached to NASA Jet Propulsion Laboratory as the lead system engineer for the rovers for Mars Mission. Being an engineer she is responsible for figure out the desired functionality to ascertain what pieces are needed to do communications, manage power, to do command and control of the spacecraft and its performance of each part.

At IISER in her lecture, Ann explained the technicalities and importance of the command and control over the velocity of spacecraft lander while on its way to touch the surface of the planet. “This is the most crucial part of the endeavor for which we toil so much for over the months”, she said. But many missions failed in the past, she said. “We learn to do the failure analysis to achieve the goal in the future missions”, she told the students.

Ann, however, refused to offer any comment about her observation on the failure of ISRO’s latest endeavor when asked by this correspondent. “I am not the right person to make any comment on this” she briefly said.

Ann, who advocated for joint space venture and eulogized ISRO’s first endeavor of Chandrayaan1 (2008) that for the first time confirmed water on the surface. “It was a great achievement”, she said.

Ann at present looking eagerly for the ISRO-NASA collaboration programme NISAR (NASA-ISRO Synthetic Aperture Radar), which she thinks would determine earth change in three disciplines – ecosystems, solid earth, and cryospheric sciences. Speaking to NFN (newsfromnadia.in), she said, “I am excited as it is the real big thing coming up in 2020”.

“This is a programme with imperatives for the next decades and beyond. At NASA we have been studying concepts for a Synthetic Aperture Radar (SAR) mission or Earth Observation Satellite to determine earth change in three disciplines – ecosystems, solid earth, and cryospheric sciences. In this endeavor we will work with ISRO in a joint mission”, she added.

An expert with IISER-K’s Center of Excellence in Space science India, said, “The ISRO has teamed up with NASA in the NISAR 2020 programme in which apart from NASA’s objectives, the ISRO will work under Indian perspective for remote sensing which includes monitoring agricultural biomass over India, snow and glacier studies in the Himalayas, Indian coastal and nearshore ocean studies, disaster monitoring and assessment”. With a total cost estimated about US$1.5 billion, NISAR is likely to be the world’s most expensive Earth-imaging satellite, the expert said.

Speaking on NISAR, Ann said, “I am very much excited about the programme, which will open up many more avenues in space studies”

After the lecture, Ann was literally mobbed up by the students of some local schools who literally mobbed-up her for an interaction, autographs and even for selfies. She advised students not to be focused on one goal’. “Whatever you do in your life adds to your own perspective and creates an ability to judge new situations”.

She also advised the students to have a good basis in Science, Technology, Engineering, and Mathematics so as to understand the fundamentals of space flight. “But, you need to be creative and practical to become a true engineer”, Ann, who loves to raise chicken and brewing beer at weekends told the students.