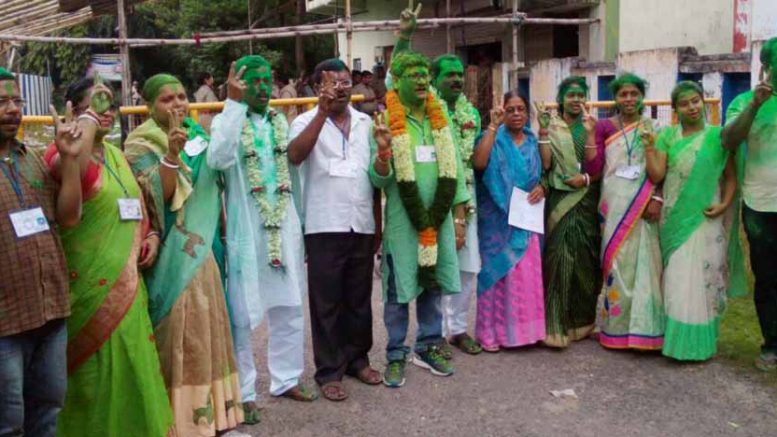 The winning Trinamul Congress candidates of Cooper's Camp after announcement of the election results on Thursday morning in Ranaghat. Picture by Tito Chakraborty

Ranaghat, Aug. 17: Ruling Trinamul Congress today retained power in Nadia’s Cooper’s camp municipality by winning all the 12 seats in the poll that held on last Sunday. In 2012, Congress got the majority and formed the board by winning in 11 out of 12 seats. But a year later all the Congress councillors joined the Trinamul Congress helping the part to form a new board.

Today counting of votes began from 8am in Ranaghat SDO office and the results were announced by 10am.

Two times Trinamul Councilor and member of previous board Supriya De, who fought as an independent candidate being denied nomination this time, has been defeated in Ward-1 by official candidate Ashoke Sarkar. Supriya is a close aide of Sankar Singh.

Working president of Nadia district Trinamul Congress Sankar Singh has expressed his gratitude to the people of Cooper’s Camp for helping the party to retain power. “This is the verdict in favor of chief minister Mamata Banerjee’s endeavor for development”, Singh said.

The BJP, which came second in most of the wards, termed the victory of Trinamul Congress as the ‘mockery of democracy’. “This is not at all true reflection of people’s mandate. The poll was rigged in many wards, opposition candidates and agents were threatened and even in some areas people in Cooper’s were not allowed to vote”, said Nadia district BJP president Ashutosh Pal.