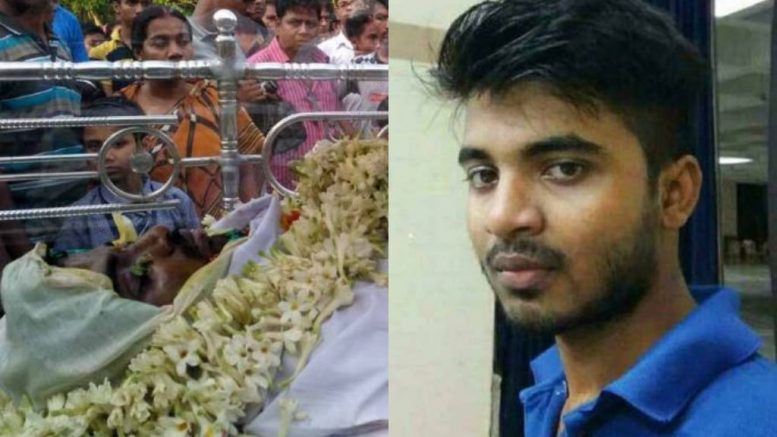 Sagar’s sister Rekha and mother Santana broke down in tears over the body. Picture by Sovan Chaudhuri

Haringhata, May 2: Police today started a murder case against three second year students of the Indian Institute of Science Education and Research – Kolkata (IISER-Kolkata) for their alleged suspected role into the death of their classmate Sagar Mandal, who was found hanging on Monday inside a hostel toilet located in the Mohonpur campus.

The case has been started under section 302 (murder) and under section  34 (common intention) of Indian Penal Code on the basis of a complaint lodged by deceased student’s father Susanta Mondal, who named three students in the FIR, which include two classmates of the victim. The complainant has accused the trio of mentally abusing his son Sagar as he belonged to scheduled caste community.

He has also accused them of killing his son and hanging him with a ceiling fan inside the deserted toilet.

On Monday afternoon Sagar’s body was found by his classmates from a toilet on the top floor of the Nivedita hall hostel, where he stayed. He was missing since early on the day and also skipped a semester examination. After preliminary investigation it appeared that the boy had allegedly committed suicide. Police had also started a suo moto case of unnatural death.

But, Sagar’s parents Susanta and Santana, a laborer couple and his sister as well as hundreds of locals in Fatehpur-Majherpara were not convinced with this interpretation. They categorically alleged that Sagar was murdered and accused three of his classmates on the basis of information he had earlier shared with his sister and mother.

The case was started late in the evening following the local villagers in Fatehpur-Majherpara blocked the Haringhata-Nagarukhra road for over three hours accusing the police for avoiding to take complaints deliberately from the boy’s family.

The road blockade started from 5pm and continued till 9pm only after the police accepted a complaint from Susanta Mondal. The last rites of the boy later done at Halisahar ghat in North 24 parganas.

Additional SP (Kalyani) Swati Bhangalia said: “It is not true that police avoided taking complaint. Police officials on several occasions told the family members to lodge formal written complaint, but they did it only after a gap of about 24hours. We have already started investigation”

Sagar’s sister Rekha said: “We do not believe that my brother has committed suicide. He was in panic due to threat and repeated harassment by three boys for last few months who always tried to disturb him so that they could do better. They in drunken state often abused him ridiculing our social and financial background. My brother used to tell me that they could attack him. But, he could never share this fear with the authorities and his teachers fearing that this could make a negative impact on his career”.

Dean of students affairs at IISER-Kolkata Arindam Kundagrami said: “A fact finding team has been set up which would try to find out the reasons behind the death. We will help police in its investigation. If any student found responsible for death of Sagar Mondal by any mean, we will lodge police complaint against him’.

Meanwhile, the autopsy of the body was conducted at JNM Medical college hospital in Kalyani. The report would be made available soon.

Earlier in the campus, a condolence meeting was organized in which IISER-Kolkata director RN Mukherjee delivered lecture urging the students to share their problems with seniors and teachers.