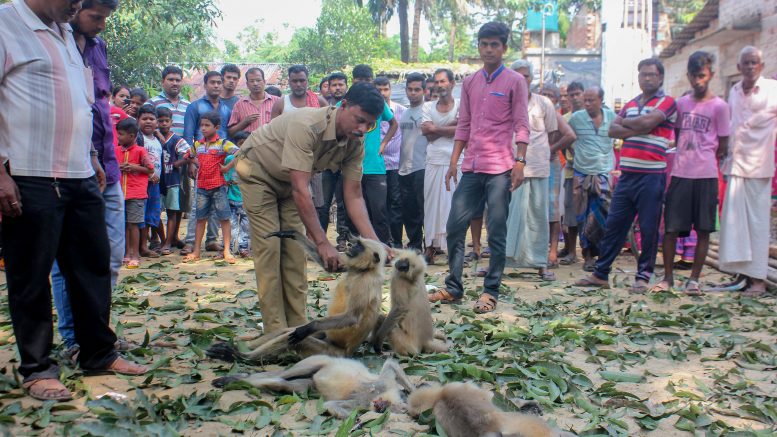 Santipur, Oct. 31: At least four langurs were found dead and few others in dying condition in an orchard in Nadia’s Santipur on Thursday morning. The incident prompted the forest officials to conduct an autopsy to determine the reason behind the mysterious death.

The carcasses were taken to a laboratory located inside the Bethuadahari Wildlife Sanctuary, where the autopsy was done late in the evening. However, a source in the district forest department in Krishnanagar claimed that the exact cause behind the death could not be ascertained in Bethuadahari. As a result, the samples of parts of the heart, lungs, liver, kidney, intestines of the deceased langurs were sent to State Forensic Science Laboratory as well as to state government’s veterinary pathology in Calcutta for an advance test.

Officials of the state Forest department suspect that the langurs might have been poisoned or their death may have been caused due to the consumption of contaminated food in any form in or outside of the village where they used to roam.

Sources in the state forest department claimed that they would examine to find out symptoms of any mysterious epidemic if spreading among the langurs that were witnessed among wild animals in the past.

The death of the langurs has meanwhile created concerns among the local residents in Haripur-Melermath, where one hundred langurs roam freely every day.

On Thursday morning, the local residents were shocked when they found langurs lying dead on the ground of the orchard while some visibly languishing with uneasiness. They immediately informed some animal care activists in Santipur town, who in turn appraised the Forest Ranger’s office in Krishnanagar.

Bhabasindhu Biswas, a local resident said, “Every morning we found the langurs gathered in the orchard and often close to the residential area for food. But, it was a different scene on Thursday morning as the langurs were lying dead on the ground. There was no injury mark on their bodies. I found some other langurs seated on the ground with visible uneasiness. We felt helpless and informed some animal care activists about the incident”.

A section of the local meanwhile suspects that the langurs might have died for drinking water contaminated with the chemical which is stored by the weavers in the area for color dying. “On earlier occasions, langurs fell ill when consumed such water after which the weavers were advised to put covers over the containers of such stored water, but the instruction was never followed”, a local resident said.

Animal care activists and member of Santipur Science club Anupam Saha said, “Primarily it appears that the langurs were died due to poisoning. But, it could not be immediately ascertained how they consumed poison. The langurs in this area have long become an indispensable part of the local habitat with close proximity to local people. So I do not suspect any foul play or human hand behind the death. They had most probably consumed poison in any other way, which can be ascertained only after the autopsy”.

Partha Mukherjee, Range officer, Krishnanagar said, “It cannot be conclusively determined the cause behind the death. We have sent the carcasses for autopsy, which can only ascertain the reasons of death”.