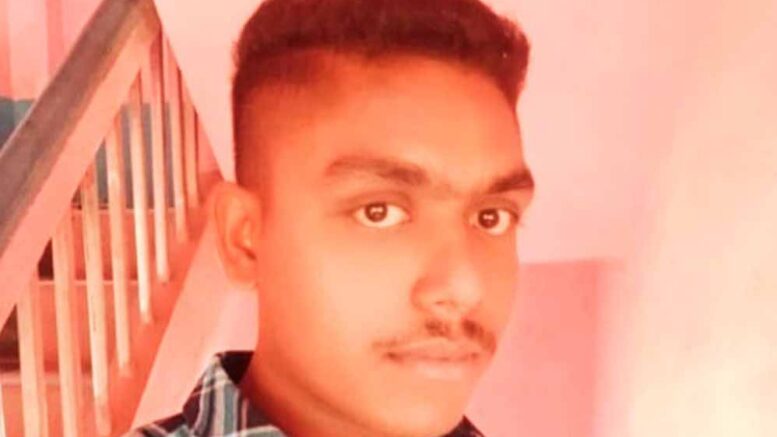 Tehatta, Nov. 14: Subodh Ghosh, 24, a Indian soldier from Tehatta Raghnathpur, posted in Indo-Pakistan border died in unprovoked firing by Pakistani forces on Friday morning barely within five hours he called her wife at home advising her to buy a sweater for their three months old baby.

A call on her wife Anindita’s mobile from Army head quarter changed the colours of Diwali at the remote village in Nadia in few seconds during the evening.

Subodh, who joined Indian army in 2016 and posted along Indo Pak border in Jammu two years ago. He returned to border during July after a vacation, a few days before Anindita given birth to their child. The couple got married during November last year.

“It was his commitment to job that forced to leave home even though he could stay home for few more says extending leave due to ailing wife on paternity ground. But, Subodh preferred to go to the front assuring wife to come back soon”, said a family friend.

“He called me late last night asked me about the temperature here in Tehatta and advised to take care of our new born daughter. He also asked me to buy protective winter garment for our daughter and told me about his plan to visit home next month to organise the rice ceremony for her…But all his planning shattered today”, Anindita said with tears rolling down from her eyes. A BSF jawan and three soldiers including Subodh, apart from three civilians were killed and eight were injured in ceasefire violation by Pakistani army along the line of control (LOC) in four districts of Jammu and Kashmir on Friday morning.

Subodh attained martyrdom along the line of control as he earned fatal injuries when Pakistani army began unprovoked firing in the area.

The mortal remains of Subodh is expected to reach Dumdum airport late on Saturday night and dispatched to his home further in Tehatta during the wee hours of Sunday morning. A pall of gloom meanwhile descended in his native village.

Subodh, Son of Gouranga Ghosh, 56, an ailing farm labour was the only earning member of the family.

“I was suffering for last 5 years. It was my son who earned the living for us… Yesterday he also called me and advised to visit doctor without being concerned of money”, said slain jawan’s mother Basanti Ghosh.

Subodh’s wife Anindita and neighbours blamed the centre for the continued tension along the Indo-Pak border. “It was only for centre’s failure soldiers died in Pulwama…it is the repetition of same incident…how long should we sacrifice our sons”, a Villager said.