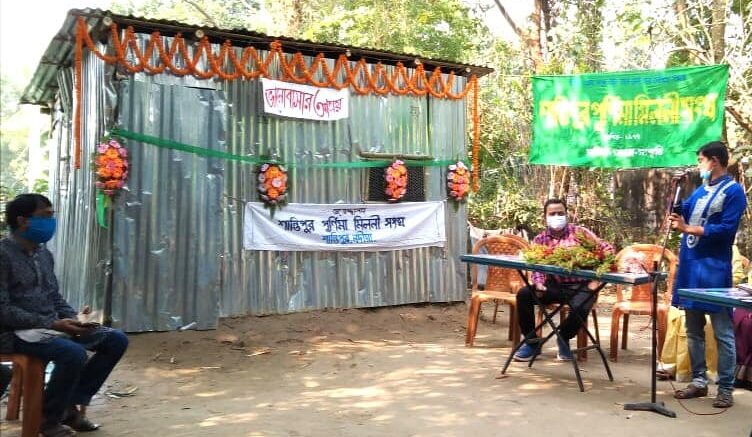 The new home built by the member of Purnima Milani Sangha

Santipur, Nov. 17: Members of a club in Nadia’s Santipur rehabilitated the family of a pandal worker in Haripur area of the town by rebuilding his house that collapsed due to cyclone amphan in May this year.

For the last six months Babla Pramanik, 42, was living under a tarpaulin shed along with his wife Pinki and their 3 years daughter being unable to repair the house due to financial constraints having no work for the Covid situation.

The members of the Santipur Purnima Milani Sangha, garnered about Rs.25000 avoiding expenses on crackers which they usually incur during Diwali, to rebuild the house using bamboo and corrugated sheets for the family.

On Tuesday afternoon, members of the club handed over the new house to the couple. The rebuilt house was inaugurated by senior police officer Raja Sarkar. The members also arranged winter garments and some dry foods for the family. The club members have meanwhile taken up another project to build a toilet for the family. Moved by the gesture of the club members, Babla Pramanik said, “I have no word to express my gratitude to them. It almost appears to me as a fresh beginning. During the past six months I was just struggling for survival with no work and money. I could not afford to rebuild the house since May last week when the cyclonic storm raised the structure”.

“The situation forced me to engage my wife to work as a domestic help to earn a living since I could not find any work except for a few days during puja. But the income was too meager to take up the rebuilding work ignoring the need for food for the family”, added the Pandal worker.

Secretary of Santipur Purnima Milani Sangha Biswajit Roy said, “While distributing garments among financially constrained people before Durga puja we came to know about the precarious living condition of the family. We were shocked to see that they were literally living under the sky with a child despite incessant rain during the time. We talked to our members and agreed to rebuild the house for them”.

“We eventually decided to save the money which we usually incur for buying crackers and decorative lights during Diwali. We found that the approximate estimated cost to rebuild the house using bamboo and corrugated sheet could be covered up through the saved fund. We eventually took up the job early this month”, added Roy.

Babla’s wife Pinki said, “It might be a renovated one, but to me it is actually a new home.  It provided me with a new lease of life today. I am grateful to all who made this possible and gave me immense happiness”.

Appreciating the endeavour, local gram panchayat pradhan Sova Mondal Sarkar said, “It is a great job done by the club members. If more people and clubs come up to extend support, many families could be rescued from the distress”.