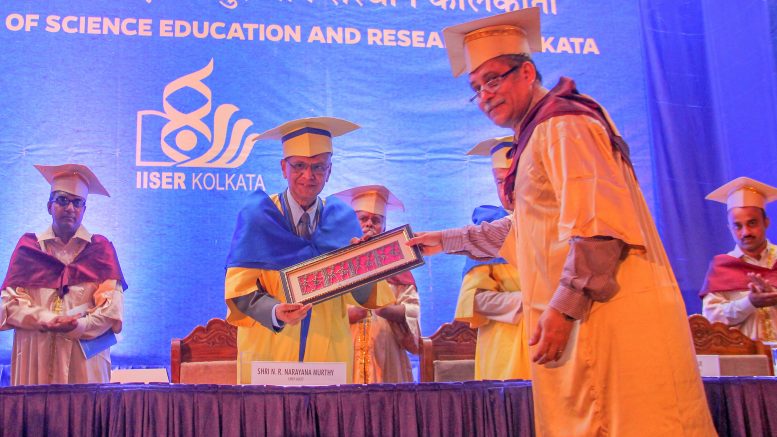 Mohanpur, June 13: Eminent IT industrialist and Infosys co-founder N.R.Narayan Murthy on Wednesday told the graduating students and researchers at the Indian Institute of Science Education and Research -Kolkata to be “disciplined” enough in their endeavor to make life better for people around them.The pioneer of Indian IT industry, who often termed as ‘Bill Gates of India’ told the students that nothing worthful can be achieved without discipline, hard work and punctuality.

Narayan Murthy, who was forced to cut short his visit and speech as the chief guest to the IISER-K in Mohanpur on the occasion of its 6th convocation due to prolonged traffic snarl on NH34, said, “Nobody can achieve anything worthwhile without discipline, hardwork and punctuality…In fact it is sad that no attribute has hampered India’s progress as indiscipline. Please keep this in your mind..”

The traffic snarl on NH34 that halted his convoy repeatedly resulted him to arrive at the IISER campus late for about an hour. The delay made the newly appointed head of Karnataka Planning Board visibly annoyed as he cut short his speech by about 15 minutes.

In a hurriedly delivered speech as the chief guest the former Infosys boss, who would now assess resources and formulate plans for overall development in Karnataka besides monitoring plan implementation, advised the students to focus on the “present” to make India a “powerful” country.

“Remember that you are judges by your current performances. Past is gone and forgotten. India may have been a successful nation 1000 years ago, but nobody care it now. Remember that performance leads recognition, recognition leads to respect and respect leads to power. Therefore, my young friends India now only become powerful through your performance – today and now”, N.R.Narayan Murthy added.

He also advised the students to shed of ego and work together as a team to achieve bigger goals that could help society. He said,”Please remember that these days scientific and engineering projects are huge which require dedicated team work…learm from symphony, where each musician is a maestro himself or herself come together, subordinate their ego and work under the direction of a conductor”.

Narayan Murthy, who earlier inaugurated the IISERk’s new academic and administrative building reminded the students to add “value” and “enhance” respect to their motherland and their institution if they settle abroad permanently.

He told the students, “Some if you would inevitably go abroad and settle down there. There is absolutely nothing wrong. However, you have two important duties when you are a citizen or a permanent resident of another country. First, conduct yourself as a model citizen of that society so that you enhance respect for India. Secondly, remember that a poor country like India given you this valuable education. Please add value to this institute and this country in whatever way you can”.

Chairperson of IISER’s Board of Governor VLVSS Dibba Rao distributed the awards for two best Master’s these from each department.