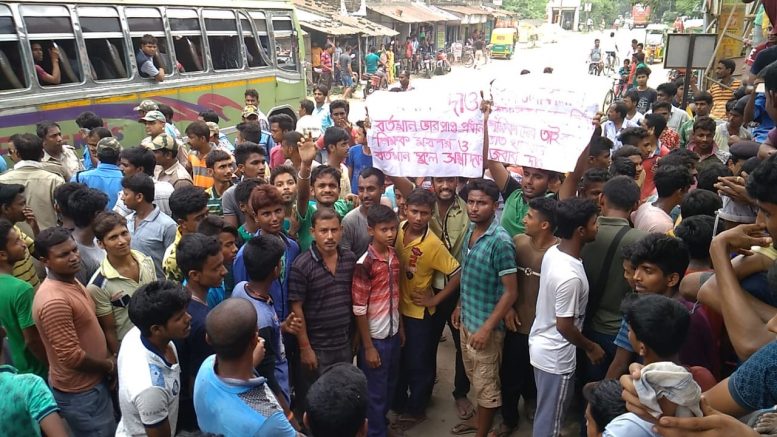 Daierbazar, June 11: Around five hundred parents and guardians today gheraoed teachers of a school inside the campus in Nadia for about four hours accusing them of dereliction in teaching as a large number of students falied in this year’s Madhyamik and Higher Secondary examination making the villagers embarrassed.

Angry with the disastrous performance of Dayerbazar Vidyamandir located in Chapra, the villagers held the teachers responsible alleging that their negligent approach deteriorated the standard of the school and they demanded that the teachers be punished for their role by the school management.

This year 110 students of Dayerbazar Vidyamandir out of 200 failed in their Madhyamik examination, whereas the number of unsuccessful candidates in higher secondary examination is 75 out of 140.

In 2017 also 30 students failed in Madhyamik examination. In HS examination 25 students were failed.

The disastrous performance angered the villagers who on Monday barged inside the campus a little after the school resumed classes after the summer vacation.

The villagers turned unruly and gheraoed the teachers shouting slogans and demanded that the management should make inquiry and announce punishment for the teachers for their dereliction. This however, prompted the administration to deploy a large police force that dispersed crowd outside the campus.

Members of the school management rushed to quell the agitators, who eventually agreed for a talk after around four hours. After the meeting school managing committee secretary Topu Saha said, “We respect the concern of the villagers. We have taken two days time for an internal investigation so that what actually led to such a poor show and also find out the role of the teachers”.

The villagers left school threatening fresh agitation unless the role of the teachers are not examined.

One of the agitators Prasenjit Pal, a former student whose brother reads in school now, said,”The teachers are irregular and not sincere to their duties. They used to organise party during school hours, cook food. They have made the school a place for their entertainment. Parents on many occasions drawn attention of the teacher in charge, but he shown no concern. He has always indulged the teachers in having fun at school sans teaching that gradually led to a declining standard”.

Teacher in charge Bikash Mandal, however, ruled out allegations. He attributed random admission of students in class 8 as the reason behind failure.

“Since past three yers a large number of students from some junior high schools are being admitted to this school in class eight. These students are very week. It becomes tough for teachers to develop their skill in just two years because of their poor foundation. This is the major reason for poor performance. However, we would find out if the teachers also acted irresponsibly”.

Guardians, however, not convinced as such students are admitted in class 9 in other schools, but they fared well.

District inspector of schools, Nadia Arindam Chatterjee said, “We have discussed the issue today itself. There are some schools in the district which have performed very poor. So we have decided to call the headmaster and the assistant headmaster to hear from them about their problems. This will be done preferably by the end of this month. We will complete these process sub divisionwise by the first week of July and take corrective steps for academic improvement”

“I have heard about lot of irregularities about the Dayerbazar school. However, there is so far no formal complaint. Nevertheless, I have decided to pick up this school  so that things are chaged there and at the same time take comprehensive measure so that performance of the schools in the district are bettered. We are hopeful that next yer it will be difference picture”.