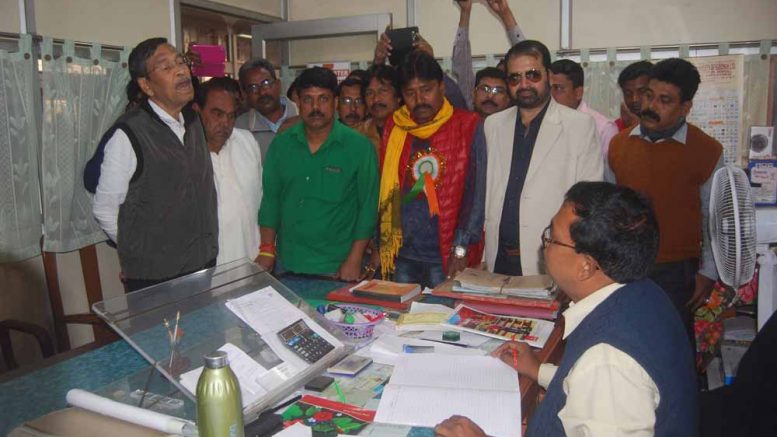 Krishnagar, Jan. 12 Nadia Trinamul leadership have decided not to allow postmen to deliver the Prime Minister Narendra Modi’s letter containing the Ayushman Bharat scheme’s enrollment card to household in the district even though the card has no validity in Bengal since chief minister Mamata Banerjee has announced pull out decision from the scheme on Wednesday.

The apparent reason, the Trinamul leadership has found potential threat in the letter, as it provides an outline of several central projects along with a picture of Narendra Modi which as they apprehends could fascinate people towards BJP.

To stop this possibility, around 200 Trinamul activists led by MLA and party’s Nadia President Gourishankar Dutta, as well as Krishnagar Municipality chairman Ashim Kumar Dutta entered the Krishnagar head post office on Saturday morning and threatened to shut down the post office unless delivery of Prime Minister Narendra Modi’s letters on Ayushman Bharat scheme is stopped immediately. In several parts of the district Trinamul workers have been doing so even much before the chief minister announced exit from the scheme.

In Nadia upto December 31 last year, 7.20 lakh such letters arrived, of which 3.80lakh for Nadia North Postal Division and 3.40 for Nadia South Postal Division. At present around 10000 letters are pending for delivery at Krishnagar post office. The Trinamul leadership has decided to stop delivery of all these letters across the district.

On Saturday morning, Dutta, who is also party’s MLA from Tehatta entered post master Prabodh Bag’s chamber along with his party colleagues and asked him to stop delivery of the Prime Minister letter on the centre’s flagship health scheme titled as Pradhan Mantri Jan Arogya Yojana (PM-JAY).

Dutta asked Bag, “Are you working as the employee of extended office of BJP to deliver Narendra Midi’s letters? Stop delivery of these letters else it would be construed that you are all working as BJP cadres. In that case we will shut down your office”.

“We will keep watching what you are doing with these letters. If postmen are found continuing delivery, we would guess that they have joined BJP and RSS. We will eventually shut down your post office, because we will not allow a government office to work as BJP’s campaining office”, Gourishankar Dutta told Bag.

Post master Bag tried to convince him that ensuring delivery of the letters is a part of the central government job for which the postmen are assigned to. But, Gourishankar and his men continued their tirade literally issuing an ultimatum.

“These are not government letters. It almost looks like party’s publicity letters with an image of Narendra Modi and a flower look logo, which is quite misleading. So we will not allow it to be delivered. Do not try to ignore our objection…else all post offices in the district will be shut down by our partu workers”, Dutta added.

When asked that how he could stop the delivery when the scheme letter has no validity after chief minister’s announcement, Dutta said, “We will not allow Modi’s picture and the misleading flower to enter the householhs here. It is not just for declining state’s recognition on the scheme, rather about Narendra Modi’s image which is being circulated deliberately using government machinery”.

Post Master Prabodh Bag, however, did not linger the argument with Dutta. He said, “Trinamul Congress activists came to my office and asked me stop delivery of the PM’s letters. I have appraised my higher authorities on it and I will act as per the guidelines”