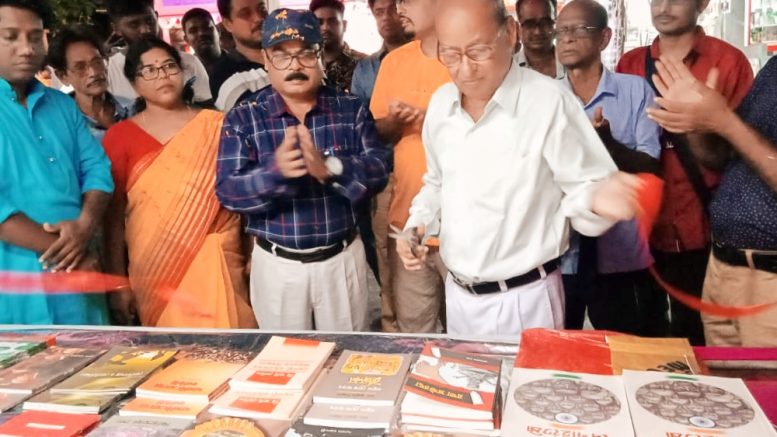 A CPM bookstall in Taherpur during Durga puja

Kolkata/Krishnanagar, Oct. 14: Overwhelmed by the huge amount of sale of books at the book stalls set up near the Durga puja pandals across the state, the Bengal CPM leadership has decided to put similar stalls during the ensuing Kali puja and other festivals like Raasa Leela, Jagaddhatri puja as well as Christmas.

The initiative, a part of CPM leadership’s endeavor to revive the ‘reading habit’ among young people, particularly those who are interested in politics, and at the same time to assess ideological leaning in the wake of the increasing presence of young generations in the recent party meetings and rallies.

With a view to assess the trend in real terms, the party has asked the district committees to submit detailed information like which books fascinated the readers most, and the number of books sold during puja among other questions. The party also wants to keep the trend alive during the Kali puja, Raass festival, Jagaddhatri puja, and Christmas by putting the books stalls. Since the preliminary reports indicate that most of the districts have sold books worth over Rs. 1 lakh, with a large number of young readers visiting the stalls, an overwhelmed CPM leadership has decided to set up similar book stalls during the ensuing Kali puja slated by the end of this month as well as during Jagaddhatri puja next month and Christmas by the end of the year.

Nadia CPM leadership that sold books worth over Rs. 7 lakhs, to add Raas festival to the list as it would set up similar book stalls during Raas festival in Vaishnav hub of Nabadwip and Santipur next month.

CPM state secretary Mohammed Salim said, “With such an overwhelming response from the people, we have decided to set up book stalls during Kali Puja, Jagaddhatri Puja, and Christmas as well”. cunningly, tried to wipe out by shutting down many libraries”, Salim added.

Setting up book stalls during puja is nothing new for CPM and seeking the sale data is also a routine affair. But, a visible change in the size of gathering in the party meetings and rallies that witnessed a decay in the Trinamul rule has reasons for the party’s Bengal leadership to do the routine job with a different perspective.

Preliminary reports have made the party quite euphoric, as district like Nadia, which witnessed serious organizational weakness during the past ten years, has sold books worth Rs. 7.80 lakhs grossly at the 33 stalls the party set up across the district.

The party’s state leadership has sought formatted data on the sale of books from the district committees asking them to submit it within October 24 to make a state-level assessment.

CPM had begun setting up stalls in 1952 to sell books and the party’s ideological literature. The brainchild of the endeavor was Muzaffar Ahmed. Party’s publishing house National Book Agency (NBA), later was entrusted with the responsibilities of the initiative.

This year, CPM set up 1300 book stalls across the state, of which 130 stalls were set up only in the city.

Among the highest-selling books, Sitaram Yechury’s recent book on the 75th year of India’s freedom, Sudhanva Deshpande’s book titled ‘Halla Bol: The Death and Life of Safdar Hashmi’ on the murder of thespian and communist playwright Safdar Hashmi, party’s central committee member Abhas Roy Choudhury’s collection of the article “Swadhinatar 75” and others.

CPM’s Nadia district committee member Supratip Roy told The NfN, “There has been unprecedented response among the readers, particularly the young ones, which we did not observe during the past few years. Apart from the books of party ideologues like Sitaram Yechuri, and Mridul De, there was a huge demand for the puja numbers of Ganasakti, Deshhitaishi, and Nandan. Books written by Sumit De on the partition of Bengal and the problem of refugees, former MP Alokesh Das’s ‘Bramho Astorambha’ was also in big demand in most of the stalls set up in the district”.

Speaking to The NfN, Mohammed Salim said, “We have asked the districts to share the reports on the volume of book sales and have given them the month of October to collate the data so that the trend could be ascertained”.