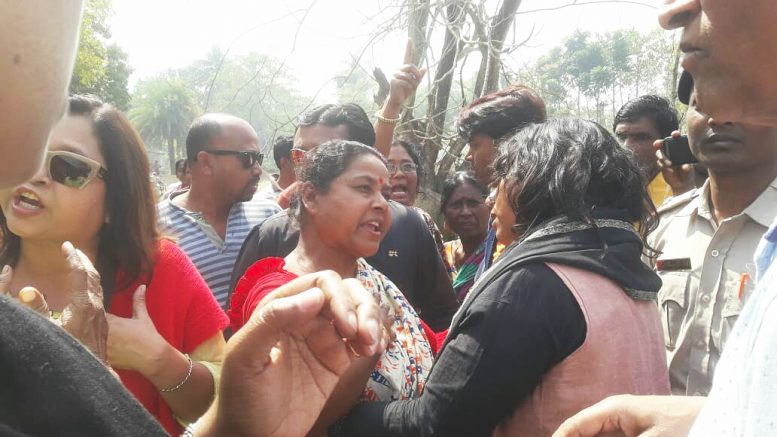 Protesters trying to convince people against filling of pond

Chakdaha, Feb. 16: A team of nature care activists and social workers that include Ananda Puraskar awardee poet Mandakranta Sen and some lawyers of Calcutta high court were allegedly assaulted by the members of a club on Sunday morning in Gorachandtala area of Nadia’s Chakdah when they went there to protest illegal filling up of a pond and felling of trees.

Sen was abused and allegedly kicked by the members of the Amra Sabai club having proximity to ruling Trinamul Congress when she tried to rescue one of the protestors at the while visiting the status of the pond spanned over an approximate area of bigha of land. A number of Trinamul activists close to local panchayat pradhan Parthapratim De later led a mob and had attacked the house of advocate Mukul Biswas, who organized the protest. They ransacked his office, vandalized cars, two-wheelers and had even put a blockade on Chakdaha-Bongaon road accusing the protestors of harassing local people.

The club authorities rubbished the allegation and claimed that the land which they have been filling was actually ditch excavated for the construction of a primary school a few decades ago.

An officer of state land and land reforms department said that as per the existing law, any low land beyond 5 cottah size cannot be filled up even it is not recorded as a pond.

But, on February 6, the Chakdaha block land and land reform officer lodged an FIR against the suspected club members after they had allegedly detained his officials and threatened them when they went for a survey and advised them to stop filling up of the pond on the basis of an instruction by the Sub Divisional officer of Kalyani.

An embarrassed BLRO had also in written communication requested the Chakdah police to ‘take drastic action” as his officials are at the ‘receiving end’ with ‘risk of like”.  However, the Chakdah police yet to start a case on the complaint of the BLLRO.

Trouble began early this month when members of the Amra Sabai club, having close allegiance to Trinamul leader and Tatla-I gram panchayat pradhan Parthapratim De started filling the pond adjacent to Itapukur primary school ground. Sources said a part of the club’s ground adjacent to the school was recently acquired for widening the Chakdah-Bangaon expressway. The club then allegedly occupied the pond and began filling it with earth by selling over a dozen of neem trees illegally.

Some local nature care activists led by Mukul Biswas, a high court lawyer had protested the filling and lodged a complaint before the district administration. The Kalyani SDO began a probe. The club members, however, using their political clout continued the filling work despite objection by the BLLRO.

On Sunday a team of protestors came to Itapukur for a spot inspection intimating the local police but eventually faced the wrath of the club members.

“This is quite an unexpected situation. We came to visit the pond and to submit a deputation at the police station against the filling. But, the local Trinamul activists tried to lynch the protestors inciting the local people, who turned violent. They attacked us with bamboo poles, bricks and beaten up the protestors ruthlessly. I was heckled and kicked when tried to rescue some of the protestors”, Mandakranta Sen said.

Advocate Mukul Biswas said, “For the last few decades the local people know the land as a submerged pond. It was a deep one and two children had also drowned in it. But, it was being filled up gradually which we protested”. Club members claimed that the ‘land’ which they have been filling is actually a ditch excavated during the construction of a primary school. “It is not a pond at all and government land record also does not recognize it as a land”, said club secretary Susanta Roy. “We decided to fill up the land so that the club ground can be expanded to organize an annual fair and cultural programme. But, some people misled the administration and brought people from Calcutta to incite them against us”, Roy further alleged.

Bibartan Bhattacharyya, a nature care activist said, “The violent way in which the club members reacted amply proves that they became desperate with political support. No low land can be filled up in this way. This is quite shocking that the leaders of the Trinamul have been supporting the club when chief minister Mamata Banerjee has repeatedly cautioned against such filling”.

Local Trinamul MLA and Minister Ratna Ghosh has apparently taken the side of the club members and accused the protestors of inciting tension. “Today the members of the tribal communities had protested as they were preparing land for their fare. A protest by outsiders for not a valid reason is unsolicited”, she said.

However, she later added, “It is unfortunate if anyone is attacked, which I don’t know what happened actually. I have told both sides to visit the land department and to check the status of the land”.