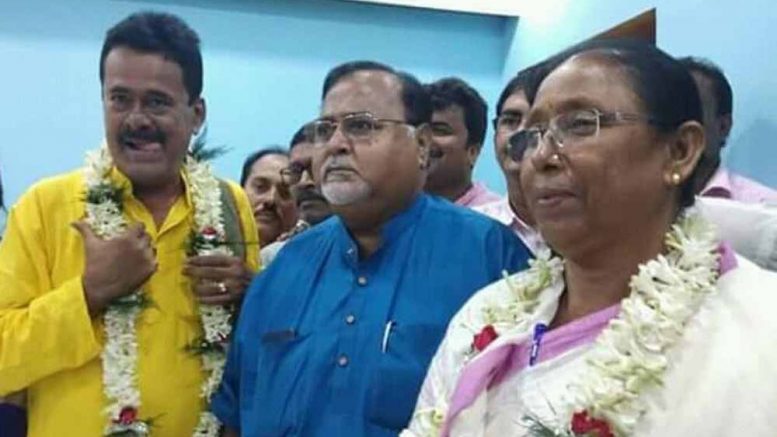 Krishnanagar, Sept. 22: Senior Trinamul Congress women’s wing leader Rikta Kundu was unanimously chosen as the new chief of Nadia Zilla Parishad on Saturday. Party’s Secretary general Partha Chatterjee, who is also party observer of Nadia district, announced her name after 45 elected representatives given their nods for the elderly leader at a programme that was held inside the Nadia Zilla Parishad complex in Krishnagar. Chatterjee also announced Dipak Bose as Kundu’s deputy in the new Nadia zilla parishad board. The other members of the new board will be announced later, Chatterjee added.

61 year old Kundu, a resident of Phulia township, was ‘Karmadhaykshya’ of Forest and Land Reforms department in the previous Zilla Parishad board headed by Banikumar Roy.

Party insiders said Rikta’s close proximity with chief minister Mamata Banerjee for over three decades helped her to get the coveted top post ignoring other contenders of the faction ridden party in the district.

Party sources said, in 1992 a deaf and dumb girl from Nadia’s Phulia was allegedly raped by some CPM activists. Rikta took the victim and her mother to meet Mamata Banerjee in Calcutta, who in turn took her to Writers’ Building and paraded them there demanding justice from chief minister Jyoti Basu. However, police had beaten Mamata Banerjee and Rikta as well as the victim girl and literally thrown them out from Writers’ Building. “Since the incident Rikta became close to Mamata Banerjee. A strong bond developed between the two which remained intact still now”, a senior party leader said in Krishnanagar.

Speaking about Kundu, party’s secretary general Partha Chatterjee said, “Rikta Kundu has a long association with party and chief minister Mamata Banerjee. She is with the party since its inception and a tested fighter. She is quite experienced being a member of the zilla parishad. I am hopeful that she would perform well”.

Speaking to the media persons after taking chair of the Sabhadhipati, an elated Kundu said, “I feel honored. I will try my best to continue the development as envisaged by our chief minister Mamata Banerjee”.