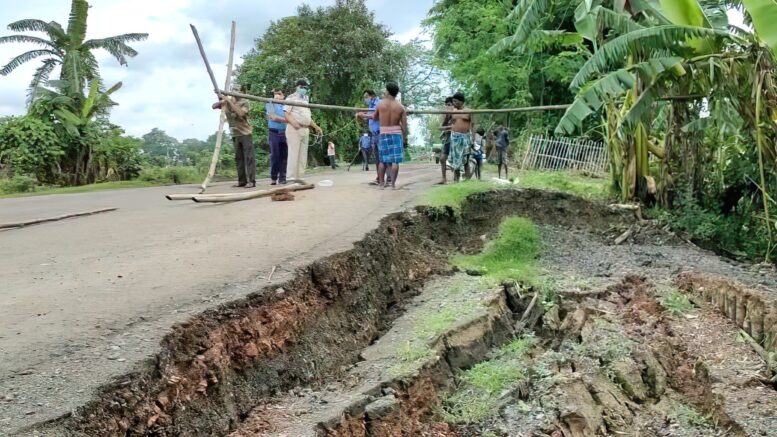 Police putting a barricade around the caved in stretch of the road.

Tehatta: A stretch of Krishnagar-Domkal (110 km) state highway caved in disrupting traffic movement near Tehatta during the early hours of Friday morning as heavy rains continued to lash across Nadia and other districts in South Bengal for the consecutive two days.

A section of the villagers put a vigil in the eroded stretch of the busy arterial road that connects Nadia and Murshidabad district and informed police authorities who eventually put a barricade later to avert possible accidents.

Local sources said that a stench of about 50 meter began to cave in from Thursday evening during the incessant rain. They alleged that cracks were also developed on several parts of the road stretch in Taranipur village of Tehatta. But the stretch eventually caved in during the early hours of the morning.

Nasibuddin Mandal, a local resident said, “We put some bricks on the stretch last night to caution the drivers. Today early in the morning I found that the stretch has caved in posing a threat to the vehicles. So we began a vigil on the spot to alert the drivers so that they go slow and avert the possible accident”.

“At the same time we informed the police and local panchayat authorities to take protective measures immediately as further damage to the road would lead suspension of traffic movement isolating the entire Tehatta subdivision and Murshidabad from the mainstream”, said Sunnat Mallick adding that the stretch also caved in last year during monsoon.

A large number of vehicles from the two neighbouring districts regularly ply on the road making it one busiest road in the region.

A team of Tehatta police later arrived on the spot and put a barricade using bamboo along with a cautionary board to alert the drivers.

A PWD official in Tehatta who is in charge of maintenance of the road stretch said, “We have visited the damaged stretch and undertake the repair works once the rain stops”.

Local residents alleged that the arterial road which is very important has been suffering due to poor maintenance for a long time. The road was constructed after the devastating flood of 2000.

“During the last 21 years no major maintenance works were taken up at all which is the actual reason behind such a cave in”, local resident Arabul Seikh alleged. “In absence of any railway communication in this part of Nadia and Murshidabad district people largely depend on this road, but the state government does not bother at all for its proper maintenance”, he added.

However, a senior official of the PWD said that an amount of Rs.82-crores has been sanctioned recently by the state government for maintenance works for a stretch of 77-km between Krishnagar and Karimpur.

“The tendering process will begin soon and we are hopeful to begin the work once the monsoon is over”, a PWD official said in Krishnagar.