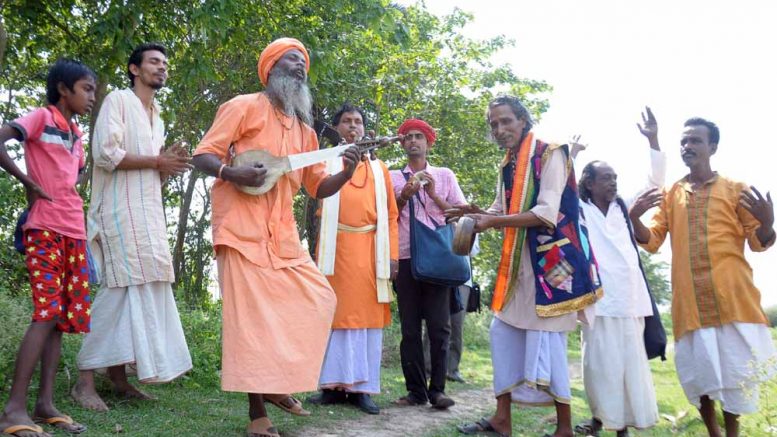 Krishnanagar, Dec. 13:  Nadia strict administration have started scanning the credentials of income certificates of the folk artists enjoying monthly retainership paid by the state government under ‘Lok Prasar Prakalpa’ after it found that over about one hundred school teachers and government employees have been enjoying the benefit illegally suppressing their personal information and income details.

Unemployed folk artistes with an annual income less than Rupees 1.5lakh are eligible under the scheme for enrollment.

Once enrolled folk artists receive a retainership of rupees 1000 per month. In addition the artistes are offered for four performances every month with Rupees 1000 paid for each.

The district administration has already identified some folk artists who are government employees and school teachers, who are enjoying retainership illegally. It has asked them to refund the gross amount of retainership they have received so far and to return the identity card which the state information and cultural department had issued to them. But, the instruction evoked little response.

During May 2014 the state government launched ‘Lok Prasar Prakalpa’ with an objective to bestow dignity on folk artistes by issuing them identity cards, to uphold the traditional folk forms, to revive folk art and culture and to uplift the socio-economic conditions of artists.

At present Nadia has 9059 enrolled folk artistes. However, during recent scrutiny it has found that a section of teachers are enrolled illegally.

In last month Tehatta based sub divisional information and cultural office asked at least three such artistes to refund the money with arrears   along with identity card. But, none of them responded so far.

“We have recently identified at least three school teachers who despite enjoying their salary receiving the payment every month. We received complaints against some artistes and conducted inquiry, which revealed the allegations are true. We then asked them to refund the gross amount they have received. But, two of them just returned the identity card, not the money”, said an official of I&C department in Tehatta.

One of such artists is Gour Chandra Saha, a teacher with Khaspur primary school, when contacted said: “I was not aware that employed artistes are not entitled for the retainership. I will try to refund the money too”.

Assistant Director of information and culture Dipanwita Mandal said:  “Payments have been stopped as per government order for those who have been identified illegally taking benefits illegally”.

Nadia DM Sumit Gupta said: “We have stopped payments and cancelled enrolments of the illegal beneficiaries, who were denying benefits to genuine ones. We will also see if any legal action could be initiated against them”.