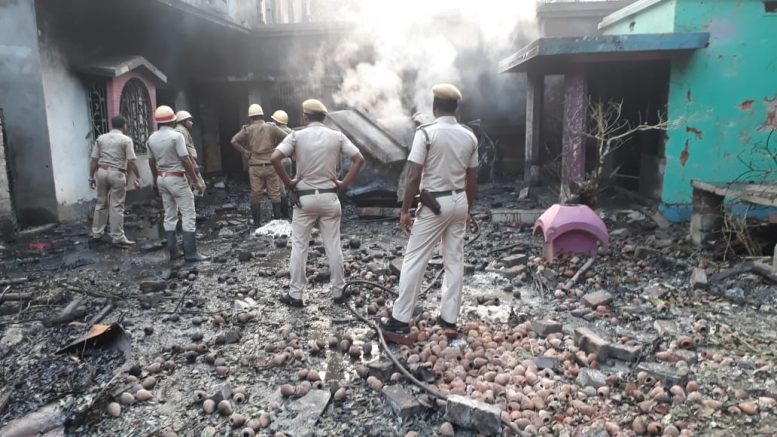 Gangnapur, Sept.16: Two persons were died and at least three others were injured in an explosion at a firework manufacturing unit located on station approach road in Nadia’s Gangnapur on Sunday afternoon. At least three houses and a car were gutted in a fire that followed the blast unleashing a panic in the area, which is barely within 100 meter away from the Gangnapuur police station.

Police could not so far ascertain the reason behind the blast, but said that existence of huge quantity of gun powder and sulphur being used to manufacture “Tubri” and “Rocket” made the impact of the blast very strong and helped to spread fire fast.

The victims were identified as Mithu Mandal (45), owner of the factory “Pampa Fire Works” and her relative Ranjit Biswas (49), died on the spot while they were working inside the factory. They were taken to Ranaghat sub divisional hospital where they were declared dead.

The impact of the blast was so strong that it created big void on the floor of the house and developed cracks on the walls of several neighboring houses. Four fire tenders from Ranaghat and Kalyani rushed to the spot and fighting hard to douse the fire completely.

“There are huge explosive and inflammable chemical ingredients left scattered in the area that kept the fire powerful for long time and causing repeated smaller blasts”, said a fire officer.

Senior police officials rushed to the spot and monitoring the fire service. However, he refused to speak on the issue.

However, an officer of Gangnapur police said, “The blast took place around 3 PM on Sunday when the workers were packaging already manufactured products in a room. It is yet to be clearly ascertained how the fire broke out. An investigation has already been started into the matter”.

Gangnapur is a major production base for fireworks in the state, which play a major role in the festive season. Around 100 families live in the area manufacturing crackers and other fireworks in unorganized way. However, most of the manufactures have no license or protective measure to run such unit.

In 2014 February similar blast occurred in the area that claimed life of a teen aged girl.