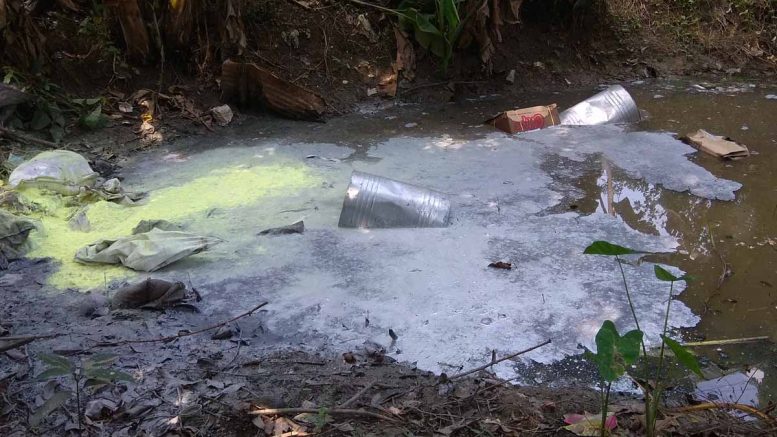 Villagers thrown out gunpowder in pond

Gangnapur, Sept. 17: A day after the massive explosion at a firework manufacturing unit in Nadia’s Gangnapur that claimed two lives and rocked the adjacent area developing cracks on several buildings, the district administration to its sheer embarrassment found that only about twenty factories have valid licence to manufacture fireworks. Police while conducting raids at the firework factories in the area found that licensed factories had stocked huge quantities of explosives beyond their  approved limit flouting the restriction set up by the Centre’s Petroleum and Explosive Safety Organisation.

Police sources claimed hat so far they have seen that most of the licencesed factories, which were authorized by district administration to stock or use only 15kg explosive materials, have piled up stocks of raw materials and manufactured products much beyond the approved limit. The huge stocks those were found during a raid in some factories by Ranaghat sub divisional police officer Laltu Halder on Monday includede illegally manufactured big sound crackers known as “chocolate bombs” of more than 60decible. The panicked local residents later checked many factories in the area and damaged the stocks by pouring waters or throwing those into nearby ponds.

“We cannot remain silent any more risking our lives. Police became proactive only for few days after every accident and turn mute then. But, we have to live here. So we need an end of this tension”, said a local resident in Bara bazar area where people damaged many finished products.

Police officers engaged in the investigation refused to speak on the allegation. An senior officer, however, on anonymity expressed “helplessness” to ensure implementation of the legal provisions due to political interference.

The officer said, “As per the Explosive Rules 1983, permission for handling, manufacturing, possessing, sale, use, transportation, importation, joto 15kg are authorised by the district administration. But, upto 200kg the said permission is issued by Chief Controller of Petroleum and Explosive Safety Organization, which is an wing of Union Ministry of Commerce and Industries. But, in Gangnapur as far as I have seen so far none of the factories have the approval of the PESO, even though these factory owners have been using gunpowder and explosive much more than the basic permitted limit of 15kg. Moreover, they never follow the safety guidelines. Police actually helpless as we have little power to ensure these law due political clout of these factory owners”.

Nadia district superintendent of police Rupesh Kumar said, “We have began investigation. We will check whether the fireworks manufacturers in Gangnapur have valid licence to use explosives”.

But, political leaders in the area think that ensuring implementation of legal provisions of Explosive act in Gangnapur is literally impossible. The fireworks manufacturing has become a cottage industry in this remote rural area where a large section involved with this industry as laborers live below poverty line. The owners of the factories are also not rich at all. They also cannot afford higher licence fee for higher quantity use. This often force us to urge police to act softer even though we realise that security is a serious concern to police”.