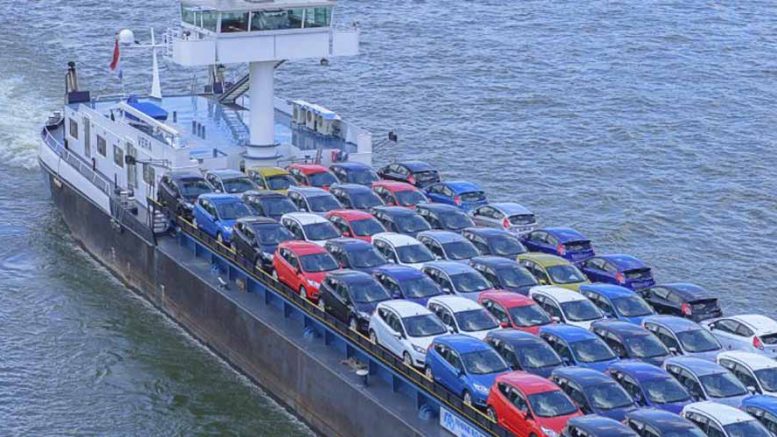 Kalyani, March 11: Bengal government would soon launch ‘Roll-on-Roll-off’ (“Ro-Ro”) boat service between Kalyani and Bansberia over river Hooghly to ferry trucks and heavy loaded vehicles since it has decided to stop plying of heavy vehicles over the 30 year old Iswar Gupta Bridge from April owing to its poor health.

‘Ro-Ro’ boats are specially designed vessels which can carry heavy vehicles like trucks, trailors, cars to cross rivers or sea. Vehicles can drive on and off the ship on its own wheel using a platform attached to the ‘Ro-Ro’ vessel.

In last year the state government announced launching ‘Ro-Ro’ services across river Hooghly at certain places with an aim to reduce traffic congestion, develop business and to create job opportunities.

Necessity to introduce the ‘Ro-Ro’ service being considered since the state Public Works Department has decided to stop plying of heavy vehicles on Iswar Gupta Bridge permanently from April 1 this year. Officials of the state PWD who have been carrying out maintenance work of the bridge said that the 30 years old concrete bridge that connects NH12 through Nadia’s Kalyani town with Durgapur Expressway through Tribeni is in a decaying state and no more capable to carry the loads of heavy vehicles.

An officer of the state government said, “A parallel bridge under the six lane flyover project is being constructed over the river Hooghly, which would take at least two years more to be completed. But, until it comes, we need a strong boat service that can ferry the trucks and other heavy vehicles”

As a solution for the looming problem, a team of officials of Inland Water Transport department visited Hooghly banks in Kalyani and Bansberia to examine the feasibility of launching ‘Ro-Ro’ boat service. Officials of Nadia and Hooghly district administration accompanied them.

In the Kalyani side the officials inspected Majhercharghat and Kacharipara Ghat where in the Bansberia side they examined the present status of Tribeni ghat and Rajasibpur ghat.

IWT officials claimed that they have been contemplating to launch ‘Ro-Ro’ service which can carry at least twenty loaded trucks from either side of the river. “However, final decision about details of the service between will be taken once technical feasibility study is done. This will include study of water level, availability of land for construction of jetty and accessible road to connect the Kalyani Expressway”, said a senior officer of IWT department in Calcutta.

Technical advisor to IWT Kundan Lal Tamta, a retired IPS officer said, “Ro-Ro” Service between Kalyani and Bansberia is one of the ten “Ro-Ro” services projects we have conceived so far. But, now the time has become very relevant since the Iswar Gupta Bridge developed snag. If plying of vehicle is totally stopped, this service become helpful. However, it will take little time since the required infrastructure is not ready”.

“We have planned to take load from World Bank to fund this project”, he added. An official said, “If everything goes all right it will take at least eight more months to launch the service”.

Officials of the IWT have found Kacharipara ghat in Kalyani is better choice for better water depth. “This ghat has deeper water which will help for navigation. On the other side Tribeni is the better choice”. However, road that connects the Kalyani Expressway needed to be widened and jetty to be constructed, an official added. Officials in Nadia administration welcomed the “Ro-Ro’ service as it would be great help to transport building materials in particular since suspension of plying of vehicles over the Iswar Gupta Bridge as a large number of development works including construction of six lane 21km flyover and second Iswar Gupta Bridge is going on apart from widening works of NH12 in Kalyani side.

Sub divisional officer of Kalyani Unice Rishin Ismail said, “For past few months plying of heavy vehicles on the Isawar Gupta Bridge have become irregular. This has affected transportation of materials. Now materials brought to town traveling longer routes which escalated the transportation cost of materials being used in development projects. So such “Ro-Ro” service will be a great help for us”.

“Our plan is to ensure parallel transportation through the “Ro-Ro” even when the second Iswar Gupta bridge become operative after few years”, the SDO said.