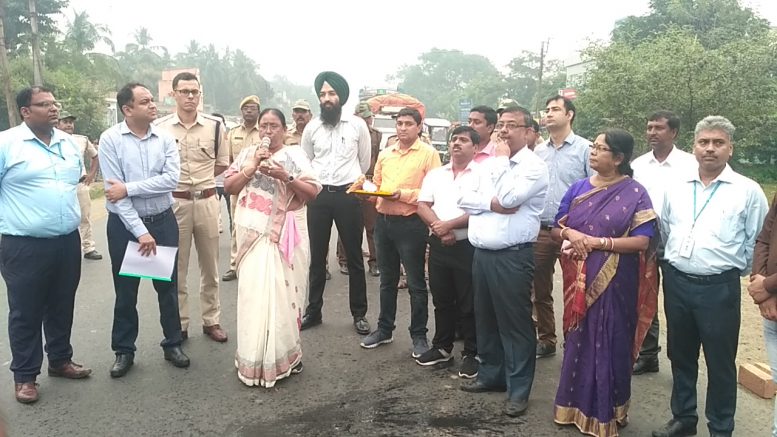 Krishnanagar, Oct. 24: The much-awaited widening works of 67 KM stretch of NH-12 (formerly NH-34) between Baro Jagulia and Krishnanagar began on Wednesday in Krishnagar by the National Highway authority with a stipulated time period of 30 months for completion.

The work was initially awarded for the 84-Km stretch from Barasat to Krishnagar to a Krishnagar based construction company. But the contract was later rescinded in 2015 due to major complications including unavailability of a clear stretch of land for expansion and poor financial viability of the construction agency.

However, since a part of the total stretch was constructed, the new work has been awarded for the remaining 67 km. The new work was formally inaugurated on Wednesday by Nadia Zilla Parishad chief Rikta Kundu in presence of Nadia District Magistrate Vibhu Goel and officials of NH authorities.

The new work with an overall project cost of Rupees 1112-Crore will be executed by Gurugram based KCC Buildcon Private Limited. On November 22, 2017, during a Pragati (Pro-Active Governance and Timely Implementation) meeting Prime Minister Narendra Modi reportedly expressed his annoyance to Bengal chief secretary for the delay of this project. He, however, approved a part of the revised project. The delay eventually escalated the project cost at least two times which was originally estimated, an official of NH authorities said.

The original work of widening the NH12 which connects Calcutta airport to Dalkhola was started in 2009 and was supposed to be completed by 2013. But, the work still remained incomplete in a major stretch which includes this 67 Km in Nadia. “Our target will be to ensure completion of the project well within the timeline. To achieve this we have urged cooperation from all the implementing agencies including police and the people”, an officer in Nabanna said.

Soutam Pal, Director of Project Implementation Unit, Krishnanagar said, “We are at present taking preparatory measures like soil testing and others before beginning the actual execution of the work. The construction works would become visible from November”.

The state PWD will work as the implementing agency of the project, which will also supervise and monitor the execution in association with the NH authorities.

According to the detail project report prepared by the state PWD, the 67-KM four-lane stretch would be consist of 1flyover, 4 railway over bridge and 7 other bridges. A modern toll plaza will also be set up in Birohi.

Whereas the previous contract faced major impediments owing to the land problem, the district administration has assured the executing agency of the new contract that it would face no such problem.

Nadia DM Vibhu Goel said, “There is no major obstruction in getting the clear land anymore. We have already paid Rupees 95.76 lakhs as compensation to the tenants. Around 90% of the people who were evacuated have been paid compensation. The payment for the remaining part is ongoing at present. We have meanwhile launched campaigning asking people to remove their establishment if they still left anything”.

Soutam Pal, Director of Project Implementation Unit, Krishnanagar said, “There are at least 1500 structures of different types which are yet to be removed. Owners of many of these structures have accepted compensation but did not remove it. The district administration has given them 15 days deadline to remove those structures, else they would be dismantled”.

Cars affixed with microphones were seen in Krishnagar and many areas in the district announcing about the beginning of widening work. People were asked to remove their structures too.