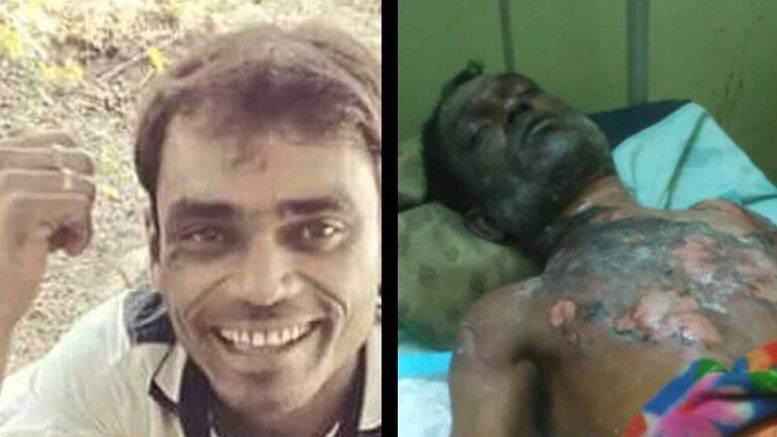 Chakdaha, Jan. 11: A youth was allegedly beaten up and set ablaze by two of his friends in Chakdaha’s Gourpara area on Wednesday night when he protested against drinking and abusing in front of his residence.

The accused “friends” who were in intoxicated state poured petrol on Santanu Das, alias Barka, and set him on fire using a burning twig. The victim, a motor mechanic by profession, in a blazing state dived into a pond to save life. Local residents rescued him in unconscious state and rushed to Chakdaha state general hospital.

He was immediately transferred to Jawaharlal Nehru Memorial Hospital in Kalyani, where at present he is struggling for live with about 70% burn injuries.

Police have started a case of attempting murder against Soumen Debnath, a driver and his associate Papai Bhattacharya on the basis of a complaint lodged by his father Jeeban Das. However, the accused youths could not be arrested so far.

The incident occurred in Gourpara Radhakrishna Colony of Chakdaha town a little after 8.30pm on Wednesday night when Santanu returned home after day’s work. He found that Soumen, Papai and some other youths were taking alcohol standing in front of his residence and hurling abusive language in inebriated state. He requested them to leave the place, but it made them angered.

Soumen beaten up Santanu until some elderly members intervened to stop him. He, however, returned to Santanu’s residence, dragged him out and poured petrol on him and set him on fire.

Bishnu Pada Bhattacharya, a neighbor said: “I suddenly saw that Santanu was engulfed with fire and running towards a pond. It was a horrible scene. He dived into the pond. I and some other neighbor rushed there and rescued them and took him to Chakdaha hospital”.