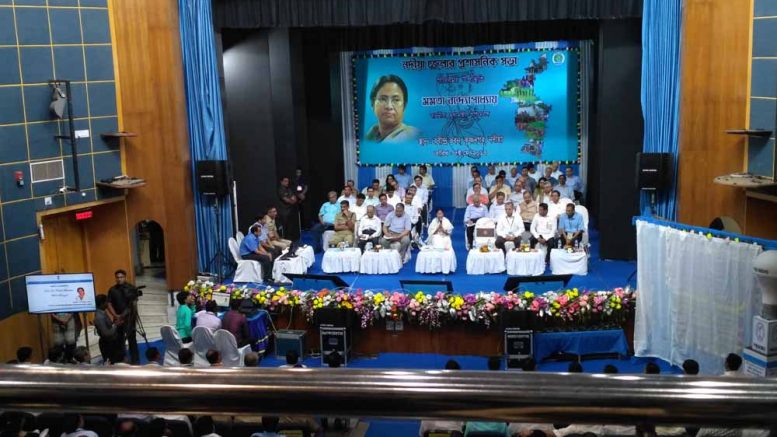 The Administrative review meeting at Rabindra Bhawan auditorium in Krishnanagar.

Krisnanagar, May 5: Chief Minister Mamata Banerjee today accused three promoting agencies for misleading villagers in Bhangar to stop the work of Power grid station using money and muscle power. Without naming the agencies, which have purchased huge quantity of land from the farmers, the Chief Minister accused the agencies of making a nexus with Maoists, BJP, CPM and Congress to misled people against setting up of power grid sub-station in Bhangar that eventually turned to be violent.

The Chief Minister today called upon the people across the state, who suffers from low voltage to identify those who have been misleading them about “radiation” from power towers and to be united to resist their campaign for sake of development. Otherwise the state government would give up such projects without any second thought.

Speaking at an administrative review meeting in Krisnanagar, Mamata Banerjee said: “I have taken clear decision that if the people don’t come up and resist such propaganda, such sub stations will not be set up”. “Aapnara Charley hobey, Na holey hobey Na”, she said for the people.

In Bhangar Chief Minister Mamata Banerjee faced a major challenge, when local people, mostly land losers, backed by Maoist, set up tough opposition and clashed with the police. Two persons were died in the clash allegedly in police firing. Eventually, the state government had announced relocation of the sub-station.

Chief Minister raised the issue while discussing “low voltage” problem in Nadia. She praised Nadia administration for achieving success fulfilling the complete target of rural electrification, but at the same time lashed the power department officials for the low voltage problem.

She said: “I have report that several areas in Nadia suffering due to low voltage. Students could not read, read or watch television. Such as the bad condition…”

“I tried in other areas to get rid of such problem by setting up power sub stations. 24 of 28 sub stations were also set up. But what happened in Bhangar..Maoists, BJP, CPM and Congress created trouble their misleading people. They told villagers that the substation will spoil green and make impact on health. Three agencies, I will not take their names, who purchased land used their money and muscle power to make false statements by locals. Their aim was to  build high rise building, shopping malls. I could not understand how some people could tell lies for money this way…But for such act the area may remain without electricity forever..”

Conveying a caution to the people against any type of propaganda Mamata Banerjee said: “Please be united to resist such act and identify people and miscreants who are involved with this. The Government has been suffering from fund crisis, nevertheless, it is willing to solve problem of low voltage, but you need to be vocal on the issue. If you want, the projects will come up, otherwise it will be dumped”

Pandey said: “There are certain areas where such problem persists, which have been identified and necessary action plan had been prepared”.

Chief Minister advised Pandey to take up projects where no problem persists at all and to prepare district wise plan.

For Nadia, the state government has decided to set up 15 new sub stations, 15 sub stations capacity will be increased as well as 15 new transformers will be set up for which power department would incur  Rupees 450 Stores.