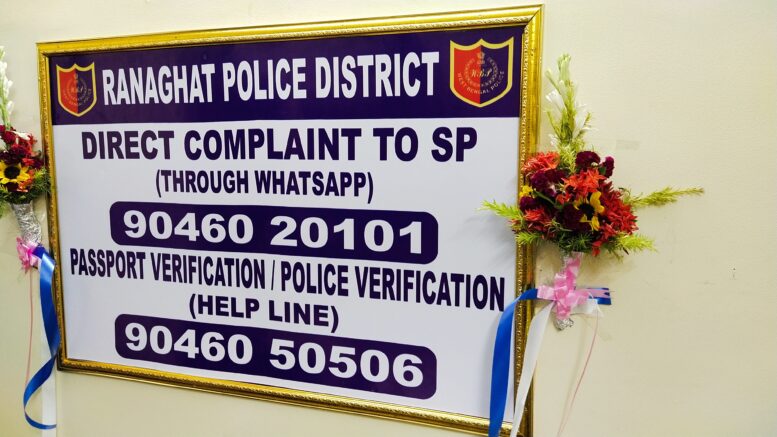 Kalyani, Aug. 2: People living under the nine (9) police stations of Ranaghat police district will now be able to lodge their complaints directly with the Superintendent of Police (SP) and seek his help through WhatsApp messenger.

A dedicated WhatsApp contact number (9046020101) has been launched for the purpose by SP Sayak Das himself on Monday at a programme in Kalyani. No call will be entertained to this number, the SP announced while simultaneously launching the website of the Ranaghat police district(https://www.ranaghatpolicedistrict.in/), which is aimed for better outreach.

However, the direct WhatsApp contact will work as a platform for ‘redressal of grievance’. A person seeking police support and  lodging any complaint should first approach the concerned local police station.

On being asked if the opportunity to communicate with the chief of the district police would encourage people to ignore the local police station, Das said, “The role of the police station for basic policing cannot be ignored. One has to first lodge the complaint with the local police station. In case of any grievance the issue may be shared with the SP. At the same time complaints on issues of greater magnitude can also be simultaneously directly lodged with the SP through the dedicated WhatsApp number”.

“The objective behind introducing the WhatsApp contact is to help people living in distant locations to reach us particularly during the ongoing Covid19 situation when public transportation is not easily available. However, this channel of direct communication would continue to serve even when normalcy restored”, Ranaghat police district’s SP Sayak Das told the newsmen.

Speaking about the passport helpline number the SP said, “People will be able to call this number for help and also be able to use it for WhatsApp messages for their support”. Similar helpline numbers for children and women will also be introduced soon, a police official said.

said that approval has been sought from the government to transform it into a full-fledged cyber crime police station. Inaugurating the investigation centre, the SP said, “Cyber crime is on rise. This is a step forward to be prepared to face the challenge of increasing cyber crime in the coming days”.

At present this investigation centre will work as a nodal agency to provide technical assistance to the police stations, he added.