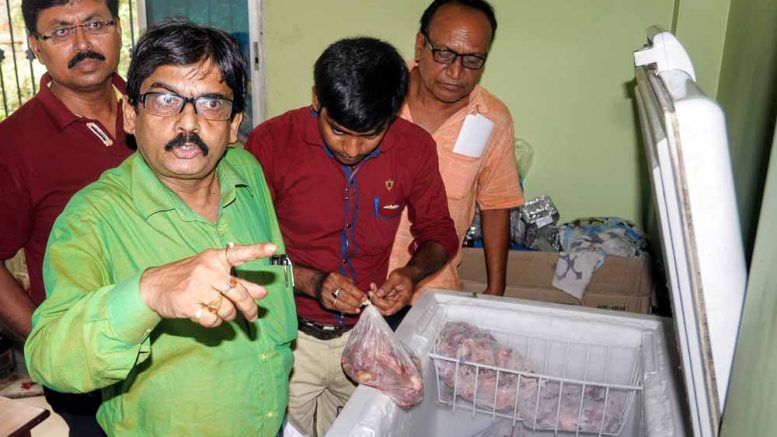 Officials of Krishnanagar Municipality examining meats at a restaurant in town

Krishnanagar, May 23: Krishnanagar Municipality authorities on Wednesday announced a temporary ban on sale of meat based cooked food items, particularly biriyani in the town for indefinite period as during an inspection it’s officials found that rotten meats were preserved in freezers of several eateries and restaurants for preparing different delicacies.

The civic authorities have also closed down about ten exclusive biriyani shops in the town as during a raid on Wednesday, municipality chairman Ashim Kumar Saha found that the processed chicken and mutton stored in their freezer are not “fit for human consumption”.

The official of the Municipality’s food safety department have collected sample of these meats and sent for test to Calcutta. The civic authority in a notification has asked the eateries not to sale any meat based items like Biriyani without its approval.

Saha today visited a number of food stalls and restaurants accompanied by municipality’s food safety officer in the town and did not hide his anger when most of the owners of these eateries and restaurants failed to show any valid documents on procurement of the meats found in their freezers.

“We have been compelled to take such steps after receiving several complaints against a number of biriyani shops and restaurants about the quality of meats they serve to customers. Except few most of these eateries have no food licence. Today I was surprised to find that the meats kept in their have no documents of their purchase. Most of the freezed meats are undated and not fit for human consumption. I have found some of them are rotten.  I was very shocked to note that one of most reputed restaurants could not even provide proper purchase documents of the meats kept in its freeze. This is quite concerning. We have sealed all these freezers and collected samples for examinations. Until the reports come, sale of meat and based items will remain banned”.

The Municipality authorities hav also convened a meeting with the restaurants and eateries owners where the issue will be discussed.

Chairman Saha said, “We will not make compromise with public health. So we have told the owners to ensure quality of the meats unless sales of meat based foods will be banned in the town permanently. At the same town we would soon began scanning the mushrooming neat shops in the town to ensure safety of public health”.

Amit Saha, manager of a restaurant which was inspected today said, “We maintain the food safety standard. Nevertheless, the municipality in generalised way banned sale of meat based food, which is quite unfortunate for us. We produced purchase proofs, but the officials were not satisfied. However, we will obey the order and not sale meat based items”.